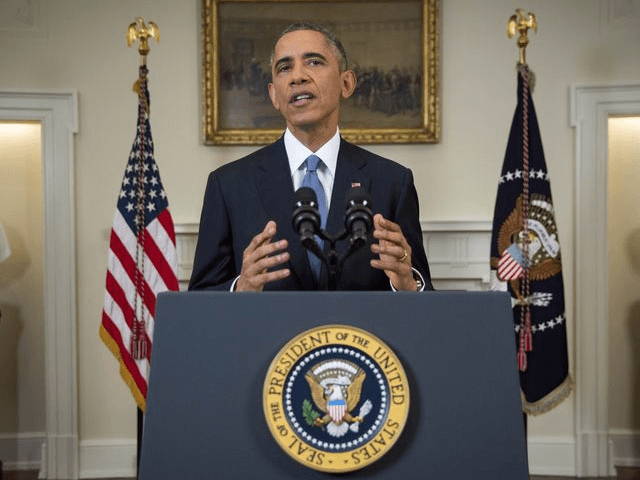 President Barack Obama unveiled a new U.S. policy toward Cuba on Wednesday as part of a deal that brought American Alan Gross home in exchange for three convicted Cuban spies. As he has done so often in the past, Obama tried to channel the perspective of America’s enemies and critics, as if his job were to act as a neutral mediator instead of defending U.S. interests and values. In the course of his address, Obama told American ten major lies, both of omission and commission.

Here they are, in order of appearance:

1. No mention of the Cuban missile crisis. “I was born in 1961 just over two years after Fidel Castro took power in Cuba….Over the next several decades, the relationship between our countries played out against the backdrop of the Cold War and America’s steadfast opposition to communism.” Cuba’s role in helping the Soviet Union project a direct threat to the U.S. mainland is carefully elided (though Obama, as he has done before, refers to his own birth as a kind of watershed.)

2. Suggesting that the president can establish a U.S. embassy on his own. “Going forward, the United States will reestablish an embassy in Havana and high ranking officials will visit Cuba.” An embassy needs to be funded by Congress, and needs an ambassador to be approved by the Senate. None of that is going to happen–nor should it, especially after the disastrous experiment in re-establishing an embassy in Syria, which Obama did in 2009, to no good effect whatsoever.

3. No mention of Cuba’s role in repressing democracy abroad. “Cuba has sent hundreds of healthcare workers to Africa to fight Ebola.” Yes, and Cuba has also sent experts in repression to Venezuela, Bolivia and Ecuador. Cuban agents also allegedly beat and raped Venezuelan protestors earlier this year. For decades, Cuba assisted guerrilla armies abroad, fomenting bloody revolution in some countries and propping up communist regimes elsewhere. It continues to do so.

4. Suggesting that Cuba does not support terrorism. “At a time when we are focused on threats from al Qaeda to ISIL, a nation that meets our conditions and renounces the use of terrorism should not face this sanction.” Yet Cuba was caught, only last year, smuggling “missile equipment” to North Korea, the dictatorship that targeted America with a cyber-terror attack on the day Obama announced the new Cuba policy. Cuba continues to offer other kinds of support to terrorists.

5. False claim that the U.S. is to blame for lack of information in Cuba. “I believe in the free flow of information. Unfortunately, our sanctions on Cuba have denied Cubans access to technology that has empowered individuals around the globe.” This is perhaps the most offensive lie of all, since Gross was detained for trying to help Cubans access technology. The reason Cubans lack news and communication is because the regime censors them brutally, not because of the U.S. embargo.