In the U.S. Senate yesterday, two incredibly valiant Cuban women who as opposed to the current U.S. administration have had the courage to challenge and confront Cuba’s repressive apartheid dictatorship and speak truth to power. 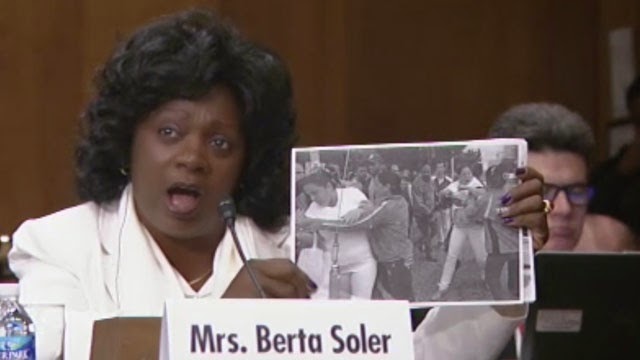 Honorable Members of the Subcommittee,

Our aspirations are legitimate because they are undergirded by the Universal Declaration of Human Rights to which Cuba is a party, and the signed international pacts on civil and political rights which have not been ratified by the dictatorship. Our demands are quite concrete: freedom for political prisoners, recognition of civil society, the elimination of all criminal dispositions that penalize freedom of expression and association and the right of the Cuban people to choose their future through free, multiparty elections.

We believe these demands are just and valid. Even more importantly, for us they represent the most concrete exercise of politics, a step in the direction of democratic coexistence. Cuba will change when the laws that enable and protect the criminal behavior of the forces of repression and corrupt elements that sustain the regime change.

In the name of those who have been executed.

In the name of Cuban political prisoners.

In the name of the pilots from the humanitarian organization, Brothers to the Rescue, murdered on Fidel Castro’s orders.

In the name of the victims from the “March 13th” tugboat.

In the name of the victims of Cuba’s Communist regime.

The Cuban government has permitted more people to operate small businesses, but due to the Cuban laws, entrepreneurs cannot be a factor to foster democracy because their existence as “private” owners depends on their submission to the government. There cannot be free markets where there are no free persons.

The Cuban government said it would free 53 political prisoners, but instead it released them on parole. Meanwhile, many others were not freed at all. Yosvani Melchor was transferred to a maximum security prison last December. He was put in prison 4 years ago for being the son of a member of the Christian Liberation Movement, who refused to cooperate with State Security. The young artist Danilo Maldonado, known as El Sexto, was imprisoned after December 17 without committing any crime. The regime turns political prisoners into pieces to be exchanged, because they can catch-and-release at will more political prisoners, and democratic nations accept this blackmail with innocent citizens […]

On 22 July 2012, Cuban State Security detained the car in which my father, Oswaldo Payá, and my friend Harold Cepero, along with two young European politicians, were traveling. All of them survived, but my father disappeared for hours only to reappear dead, in the hospital in which Harold would die without medical attention.

The Cuban government wouldn’t have dared to carry out its death threats against my father if the US government and the democratic the world had been showing solidarity. If you turn your face, impunity rages. While you slept, the regime was conceiving their cleansing of the pro-democracy leaders to come. While you sleep, a second generation of dictators is planning with impunity their next crimes.

Don’t turn your backs on Cubans again; don’t earn the distrust of the new actors of our inevitably free future, in exchange for complicity with a gerontocracy who belongs to the Cold War era.

See video of their testimony HERE.

Notes from the Cuban Exile Quarter has more coverage of the Senate testimony by Ms. Soler and Ms. Paya HERE and HERE.

1 thought on “Testimony in the U.S. Senate: ‘In the name of the victims of Cuba’s regime: Cuba si, Castro no’”