Make no mistake, this is exactly the type of “interaction” with the “Cuban people” President Obama envisions in his new Cuba policy.

Is Obama’s Policy to “Empower” or Insult the Cuban People? 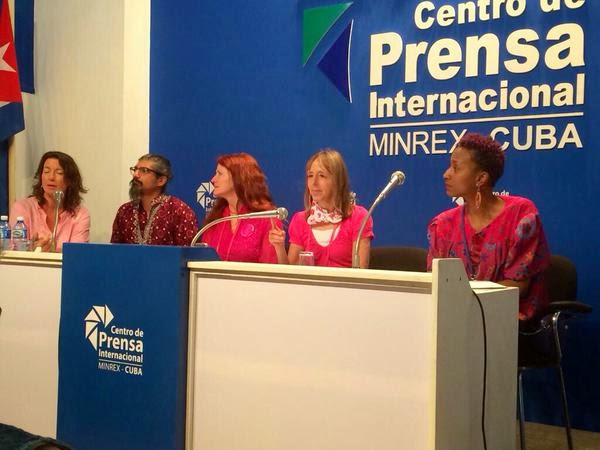 President Obama has stated that the purpose of his new travel policy is to “empower” the Cuban people.

(Let’s put aside for a moment the fact that Cuba’s travel industry is owned by Castro’s military and security services, which a top State Department official was clearly unaware of during last week’s Congressional hearings.)

Yet, one of the first delegations to travel to the island pursuant to Obama’s policy is the far-left group, Code Pink.

Their “people-to-people” trip is called “To Cuba With Love,” for it aims to gush over Castro’s dictatorship.

Predictably, upon their return, Code Pink has announced that it will embark on an effort to lobby the Obama Administration to remove Cuba from the “state-sponsors” of terrorism list.

After all, Cuba’s unmerited removal from the “state-sponsors” list remains one of the main concessions that Raul Castro is further demanding from Obama.

Sadly, none of this is a joke.

(Note to OFAC: How doesn’t this trip violate the requirement that “a predominant portion of the activities must not be with individuals or entities acting for or on behalf of a prohibited official of the Government of Cuba“?)

A group of 150 journalists, academics and activists have arrived in Havana, Cuba, as part of a delegation with the peace group CodePink. The delegation plans meet with Cuban officials and members of the Cuban 5 who were recently released from U.S. prison. The activists have called for Congress to lift all travel restrictions and return Guanatánamo Bay to Cuba. CodePink co-founder Medea Benjamin said Cuba should also be removed from the list of state sponsors of terrorism, where it stands alongside Iran, Sudan and Syria.

Medea Benjamin: “We also think it’s important that we work, when we go back, to push that Cuba be taken off the terrorist list. There is a State Department report that’s supposed to come out in March that is supposed to advise President Obama on whether Cuba still belongs on that terrorist list, and we want to be ready for when that report comes out by putting out educational work and organizing and lobbying for Cuba to be taken off the list.”