We all heard about the wave of repression that swept over Cuba yesterday with over 200 peaceful dissidents violently arrested by Castro State Security (read about it HERE, HERE, and HERE). But the image and story below goes further than just illustrating the violent nature of the repression the Cuban people are subjected to day in and day out. It shows the vile racism that permeates the apartheid Castro regime and its henchmen. And now that the United States, the only country that ever challenged and confronted the Cuban dictatorship, has decided to surrender and subjugate itself to the Castro brothers, the apartheid Cuban regime is now more than ever emboldened to carry out its violent repression against the island’s dissidents, most of whom are Afro-Cuban.

Apparently, President Obama finds supporting a violent and racist regime in Cuba that literally tars peaceful Afro-Cuban dissidents a small price to pay for securing what he thinks will be his legacy. 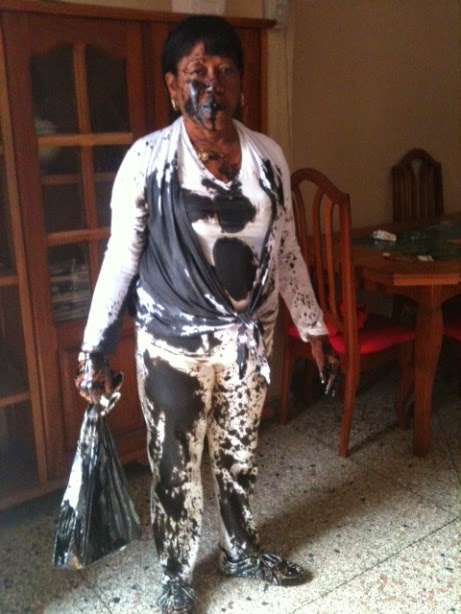 Among the hundreds of political arrests today was the case of Digna Rodriguez Ibañez, a member of The Ladies in White in Santa Clara, who was attacked by Castro regime agents and pelted with tar.

Will President Obama condemn the racist connotation of such attacks against Afro-Cuban activists?

See the image [above] (or here) of Digna Rodriguez Ibañez, pursuant to the attack: