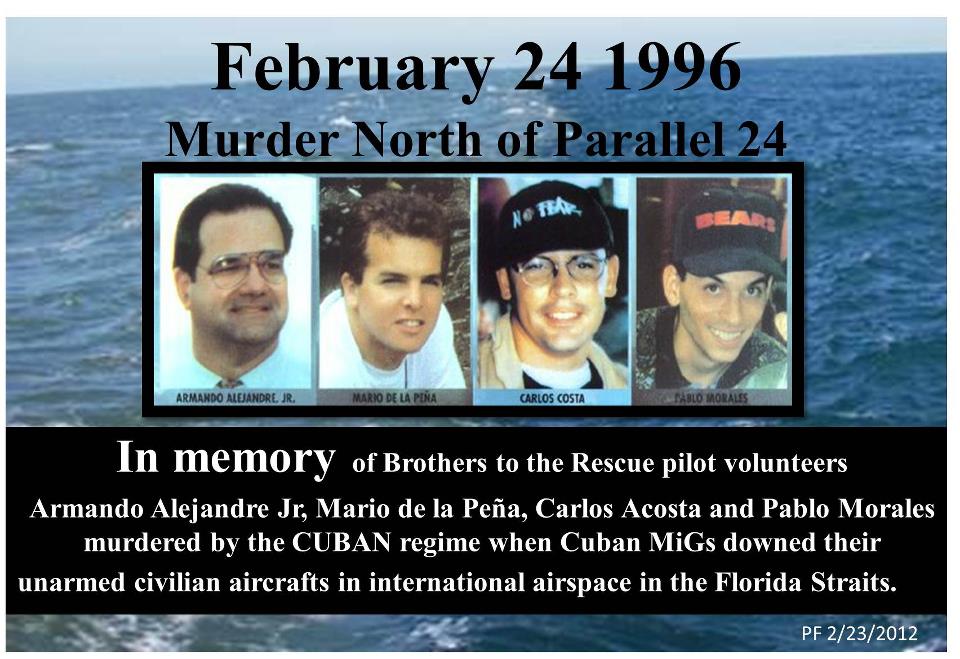 On February 24, 1996, three civilian American planes were flying in international airspace over the Florida Straits. The airplanes were part of the Brothers to the Rescue organization on a humanitarian mission to find and provide aid to Cubans who had escaped the island prison of Cuba on rickety rafts through the shark-infested waters that separate Cuba and the Florida Keys.

On that fateful day, acting on intelligence provided by its spies in the U.S., Cuba’s vile Castro dictatorship decided it was time to send a message. Fidel and Raul Castro scrambled MiGs to intercept the unarmed civilian aircraft and what has become one of the most heinous acts of cowardly terrorism in modern history, Castro himself gave the order to shoot down the defenseless airplanes and murder four Americans.

The disturbing, gut-wrenching, and infuriating audio of the radio calls made by the cowardly Cuban MiG pilots who screamed and cursed in glee over shooting down defenseless airplanes and murdering the pilots:

And in case anyone is wondering who the Cuban spies were that provided the Castro regime with the intelligence to carry out this act of international terrorism, they were fortunately captured, convicted, and sentenced to long prison terms for their acts of espionage and conspiracy to commit murder. Unfortunately, on December 17, 2014, President Obama traded them back to the Castro dictatorship in exchange for absolutely nothing.

Read more about this solemn anniversary:

1 thought on “19 years ago today: In an act of terrorism, Cuba shoots down two civilian American planes, murders four pilots”