While the government exports thousands of doctors, old diseases are coming back, such as dengue fever, tuberculosis, whooping cough, chikungunya, and cholera, and new exotic diseases are appearing that had never before been seen on the Island. 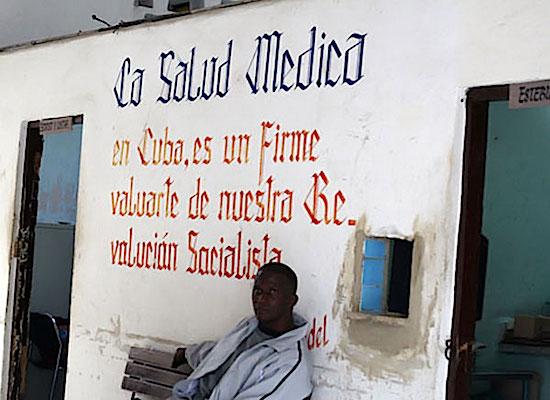 Cubanet, Miriam Celaya, Havana, 18 February 2015 – For a few days, Maritza thought that her four-year-old son’s persistent cough was due to a combination of a cold and his chronic allergies. The crisis had started with a fever and a few episodes of hacking cough, and had escalated over the next couple of days, even though he was no longer running a fever. The pediatrician’s diagnosis confirmed Maritza’s suspicions: Alain was suffering from a viral infection, so they would follow the normal treatment in cases like his: they would watch him, give him plenty of liquids, expectorants and antihistamines

But after two weeks, his coughing got so much stronger and frequent that Maritza ended up having to go to Pediatric Hospital at Centro Habana so that her son – already cyanotic and having respiratory spasms — could be treated with oxygen. Almost by happenstance, an experienced doctor who heard the child cough took an interest in the case, and, after a more detailed examination, made her diagnosis as whooping cough, a disease Maritza had never heard of and against which – at least in theory — all Cuban children are protected, thanks to subsidized national health system vaccination programs. Furthermore, according to official statistical records, whooping cough (pertussis) was eradicated from Cuba many years ago.

Thanks to that doctor’s providential presence, Alain was treated with the appropriate antibiotics and, following the advice of the doctor, Maritza asked a relative who resides abroad for an emergency shipment of a medication that does not exist in Cuba, pertussis suppositories, used in the treatment to lessen the child’s coughing crisis.

Alain is recovering now, but his convalescence may take up to three months or more. Maritza has overcome her anxiety, but wonders how many children will be in the same predicament, considering that this highly infectious disease is circulating around the Island, and health authorities have not sounded the alarm. In fact, she recently found out that in the past several years the incidence of whooping cough has been on the rise, not only among children, but also among adults.

The lack of information in the official media results in the population not having a clear perception of the risk, and turns Article 50 of the Constitution of the Republic of Cuba into meaningless babble. The article establishes the right of all Cubans to medical care and health protection, and points to the State as guarantor of that right.

Turning back the clock

Dengue fever, tuberculosis, whooping cough, chikungunya*, cholera … With the reappearance of old diseases, the introduction of others that did not exist on the Island and the lack of effective drugs, it would seem that Cuba has regressed to the nineteenth century. However, the Cuban national health system remains a prestigious benchmark for international agencies, particularly since lending Cuban medical services abroad has become the most important source of the government’s capital income and a powerful political tool, given that it allows displaying as example of solidarity and altruism what is actually a poorly disguised form of modern slavery.

So, while the government exports the service of tens of thousands of medical professionals at the expense of a loss of attention to Cubans, and the exposure of the Cuban population to multiple imported diseases, the institutional bureaucracy of international organizations congratulates itself on being able to count on a whole army of doctors mobilized by the regime to deal with epidemics and other pathologies. The government of any moderately democratic nation would never be able to recruit doctors as if they were mercenaries.

The truth is that Cuba currently has two opposing systems: one of “health”, which only exists in theory and today is a sad imitation of what it once was; and the other of “unhealth”, much more efficient, endorsed in a completely dismal hospital and services infrastructure, and in the continuing incursion of exotic diseases, imported by our doctors from the most infected corners of the globe, since, upon their return home to Cuba, the practice of a rigorous quarantine plan and infection risk control is not followed.

All this in a nation that, in the late 50s of the last century, stood out among the top in terms of health care at the regional and global levels, with a respectable hospital network in addition to membership clinics, emergency clinics, maternity hospitals and other health services, both free and private.

At this rate, it is likely that, when the Castro regime finally ends, we may have to request emergency services from the World Health Organization itself and from the International Red Cross in order to address Cubans’ health crisis, as occurred during the US occupation after the 1898 War of Independence, which created the basis for what would become, during the Republic, one of the most enviable health systems of its time.

*A viral disease transmitted by the bite of infected mosquitoes.