By Sara Rumpf in Breitbart:

Exclusive: Rubio Says He’s Ready ‘to Serve Our Country in Its Highest Office’ 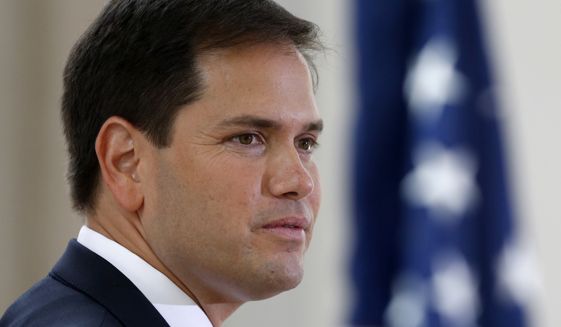 MIAMI, Florida — As Sen. Marco Rubio prepares to launch his presidential campaign on Monday, he gave an exclusive interview to Breitbart News about his preparations for the big day, what this day means for his family, what he thinks his unique voice will add to the race, and what he believes the Republican Party must do in order to successfully reach the American people.

Rubio is well known for being a dynamic public speaker, never needing a teleprompter and rarely even using notes. His rhetorical skills were on display in a teaser video posted on Friday to promote his announcement, which contained highlight clips from his speeches over the past few years. Monday, Rubio enters the national spotlight more than he ever has been before, and Breitbart News asked him if he was doing anything different to prepare for this speech than he had for prior events.

“I’m trying to keep it as normal as we possibly can,” replied Rubio, who added that he had been focusing on spending as much time as possible with his family. Rubio and his wife Jeanette have four children. “I still have a young family and I have important obligations to them, which are more important than anything else I do.”

Family has always been a priority for Rubio, and central to his message on the campaign trail. Rubio has frequently told the story of how his parents left Cuba with practically nothing to build a better life here in America. His mother was a maid and his father was a bartender, and he would mention at events that one of the things that made America so great was that he was standing at a podium in the front of a hotel ballroom very much like the ones where his father would have been tending bar at the back.

Monday, the bartender’s son will be speaking in the front of yet another room, this time as a presidential candidate. Breitbart News asked Rubio what this meant for his family.

Rubio replied that, like any family, there was a “sense of pride about what we’ve done up to this point and how far we’ve come,” but also a “sense of wonder” about this “incredible country [where] five, six decades ago, a young couple arrives with no money, barely speaking English, no connections, and very limited education, and sixty years later, their son is running for the highest office in the land.”

“I mean is there really any other country in human history where that journey would even be possible?” asked Rubio. “I think it’s a testament to [my parents] certainly, but more importantly to our country.”

Rubio told Breitbart News that his goals for Monday’s speech were simple: to share his story with America. “For me, it’s basically putting on paper and then stating in my own words why I made this decision and why I’m moving forward,” he said. “Explaining to people from both my heart and my mind why it is that I believe I’m uniquely positioned at this moment to serve our country in its highest office.”

“That’s what I’ve tried to work on putting together,” Rubio said. “We’ll be ready.”