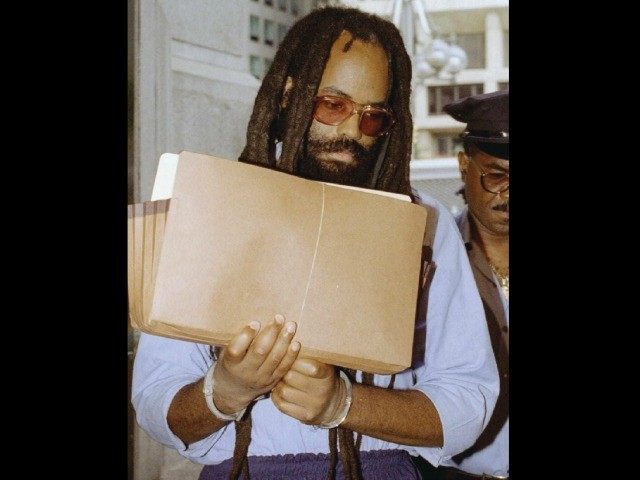 The A.J. Mustie Institute, named after a famous pacifist, started with the express purpose of “supporting nonviolence and social justice.” Now, the institute has a new executive director and has sent out a fundraising letter from convicted cop-killer Mumia Abu-Jamal. The letter includes a 2013 photo of the new director, Heidi Boghosian, and Mumia sharing beaming smiles and a hug.

In the letter, Mumia, a lifelong violent criminal and, most notoriously, the murderer of police officer Daniel Faulkner, writes to the donors of Mustire Institute:

Do you know who A.J. Muste was? Well, neither did I.

I had to research it — not online, for prison cells in Pennsylvania have no such amenities — but by checking through books, like Howard Zinn’s classic, A People’s History of the United States, and, of course, others.

Muste was a central (yet largely unknown) figure who introduced a young college student and seminarian named Martin Luther King, Jr. to the notion of nonviolent activism, and by so doing, changed him, and through him, the entire country.

Heidi Boghosian is well known as a radical leftist and had previously served as executive director of the National Lawyers Guild (NLG)—an organization infamous for its ties to the Communist Party, USA.

As a leader of the NLG, Boghosian often put her organization in the service of the Communist Castro regime in Cuba. The contradictions arising from having such an agent of violence and repression serving as head of an institute dedicated to “supporting nonviolence and social justice” are, needless to say, shocking.

For example, the Mustie Institute offers a series of pamphlets reprinting the words of Martin Luther King Jr. on the philosophy of nonviolence. Ironically, in 2010, Boghosian wrote an article in the Huffington Post titled “U.S. Media Misrepresents Cuba’s Human Rights Record,” in which she defended the Cuban government over the death of black Cuban human rights champion Orlando Zapata-Tamayo. In 2002, Zapata was arrested alongside Dr. Oscar Elias Biscet for, as Humberto Fontova describes the event in his latest book, the “crime” of “reciting the works of Dr. Martin Luther King, Jr. and the UN Declaration of Human Rights in a Cuban public square, while carrying the Cuban flag upside down. This ‘crime’ was greatly compounded by Dr. Biscet’s specifically denouncing the Castro regime’s policy of forced abortions.”

Read it all HERE.