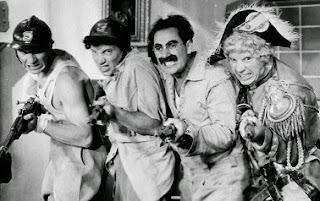 The biker battle in Waco this week-end killed nine hoodlums. That’s over twice as many killed in action as during the most celebrated and epic battle of the (media-concocted) “war” by (bogus) comandante Fidel Castro’s (phony) guerrillas against Batista’s (joke of an) army.

But perhaps I’m a bit biased in these matters and have grown a tad cynical? Fine, here’s military historian Arthur Campbell as quoted from his authoritative, Guerrillas; A History and Analysis:

“The Guerrilla war in Cuba was notable for the marked lack of military skills or offensive spirit in the soldiers of either side. The Fidelistas were completely lacking in the basic military arts or in any experience of fighting.”

Regarding the media celebration of this “Battle,” of Santa Clara here’s the New York Times on Jan 4, 1959:

“One Thousand Killed in 5 days of Fierce Street Fighting,” Commander Che Guevara appealed to Batista troops for a truce to clear the streets of casualties…Guevara turned the tide in this bloody battle and whipped a Batista force of 3,000 men.”

And here’s Che hagiographer Jon Lee Anderson from his famous book which was written in Cuba with the full cooperation of the Castro regime– but which remains the most-cited and consulted by academics and movie/documentary producers:

“Santa Clara became a bloody battleground…pitched battles were fought in the streets, Tanks fired shells, airplaones bombed and rocketed, both civilian and guerrilla casualties began piling up in hospitals.”

Che’s own diaries reveal that his forces suffered exactly one casualty during this Caribbean Stalingrad, as depicted by the Times. Your humble servant here interviewed several eye-witnesses (on both sides) to this “battle” and their consensus came to about five casualties total for this Caribbean Iwo Jima.