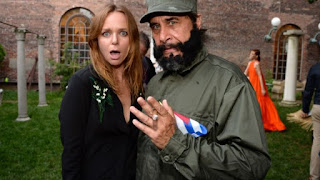 Fashion designer Stella McCartney is a vegetarian PETA spokesperson who denounces the killing (or collateral death) of any animal for the benefit of humans, whether it be to provide clothing or nutrition or medicine or (God-forbid!!!) fun AND delicious, genuinely organic meals…

Here’s her latest fashion exibit (H/T to our ZIVA)

In case any Saturday Night Live or Comedy Central writers are visiting Babalu today here’s a few ideas for scripts and skits:

Among Stella’s Dad’s most famous quotes we find: “All you Need is Love!”

Well, among the most famous quotes by her fashion-show icons we find these:

* “My nostrils dilate while savoring the acrid odor of gunpowder and blood!”

* “Crazy with fury I will stain my rifle red while slaughtering any surrendered enemy that falls in my hands! With the deaths of my enemies I prepare my being for the sacred fight and join the triumphant proletariat with a bestial howl!”

*“Hatred is the central element of our struggle!… Hatred that is intransigent…Hatred so violent that it propels a human being beyond his natural limitations, making him violent and cold- blooded killing machine…We reject any peaceful approach. Violence is inevitable. To establish Socialism rivers of blood must flow. The victory of Socialism is well worth millions of atomic victims!” (thus spaketh the icon of flower-children, and apparently of the daughter of one very famous flower child.)

Below we see Stella’s fashion icons putting their words into action. An estimated 16,000 Cubans were murdered in this manner by Stella Mc Cartney’s fashion icons:

BTW: if the above quotes sound remarkably like those on many lists of Che Guevara quotes making the rounds on Facebook and the internet, it’s because they come from my groundbreaking book on this matter. Most of those lists (especially the ones compiled and posted by libertarians) shamelessly lift the fruits of my research and translation without the slightest attribution. My groundbreaking and internationally-distributed book is the only one to translate into English the unflattering sections of Ernesto Guevara’s writings.