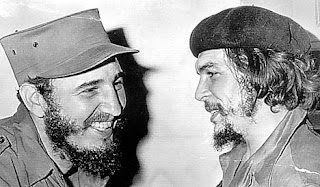 Che Guevara Masoleum Attracts 4 million Visitors. This week from Cuba’s Granma: “According to Yaneski Gutierrez Fernandez, an expert employed by the complex, of the total number of visitors the monument has seen, 2,400,948 are foreign. Most of these foreign visitors come from Argentina, Italy, Canada, Spain, Germany and France. Most Cuban visitors come from Villa Clara and Havana.

Yaneski also pointed out that, though the flow of visitors has always been constant, the number of visitors began to grow sharply after the remains of Che Guevara and his comrades in arms were brought back to Cuba in October of 1997, as the 3,812,632 visits to this sacred site since demonstrate.”

“My only deficiency of any importance is not to have trusted you more…in not having understood soon enough your qualities of leader and revolutionary. I have lived through magnificent days and at your side…Rarely has any statesman shone more brilliantly than you…I feel pride, too, in having followed you without hesitation!”

From late CIA officer Mario Riveron (part of the CIA team who helped capture Che Guevara in Bolivia) to your humble servant here:

“Ni una aspirina,” were Fidel’s instructions to the Bolivian Communist party, meaning they were not to help Che in any manner–not even with an aspirin if he complained of a headache. Since 1964 Fidel had been looking for ways of rididng himself of Che. Given Che’s international stature it would be a more delicate matter than ridding himself of Camilo Cienfuegos. But of course he’d find a way.”

“Don’t shoot! I’m worth to you more alive than dead!” (Che Guevara upon capture.)

“Como???!…No jodas, chico! Not for me.” (Thought bubble above Fidel Castro’s head at the time.)

3 thoughts on “Che Guevara Masoleum in Cuba racks up 4 million visitors– “They smile in your face–the BACKSTABBER!” (Fidel Castro)”