By Mario Lleonart in Translating Cuba: 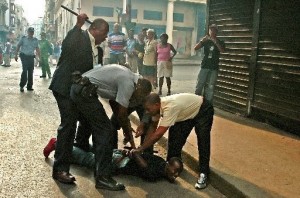 Mario Lleonart, 5 June 2015 — Beatings of peaceful demonstrators in Havana have been in the news for eight consecutive Sundays. In one of the first rounds, the son of the labor leader Jesús Menéndez was dragged for several yards along the ground with no concern for his advanced age.

On the seventh Sunday, between beatings and more beatings, it was obvious that another attempt was made to kill Raúl Borges Alvarez, this time with a sure blow to the chest–no matter (or, actually, because of) his having undergone heart surgery.

Even so, with respect to Raúl, officials from State Security warned his son, Ernesto, in prison, and his other son, Cesar, on the street, about the the possibility of Raúl’s imminent demise from his additional ailment of “chronic pancreatitis”–the same condition that killed Juan Wilfredo Soto García on 8 May 2011, following a beating by police three days earlier–because of course death can be a natural consequence of a beating, especially if one has prior health problems, and it is well known that the area of the pancreas is another preferred target of the attackers.

Some of us had hoped, following the announcement about normalizing relations between the US and Cuba, that there would be a stop to–or at least a lessening of–the beatings, but we now know that what is happening is precisely the opposite.

It would seem that the beast is feeling mightier and able to strike with impunity. This is borne out by the 641 arrests in May, the highest number of detentions of dissidents in the last 10 months, and which always, in some fashion, involve violence.

During the beatings and acts of repudiation against the Ladies in White, the political authorities have not hesitated to shamelessly transport the tormentors on buses that were brought to Cuba by the “Pastors for Peace” Caravan–an unintended purpose for these vehicles, we assume.

Experiences such as the recent Seventh Summit of the Americas in Panama show that the regime that is an expert in beatings is willing to export this modality of intolerance to whichever location in the world will receive it. The international community can confirm that the system which, for survival’s sake, accedes to dialogue with its historical enemy, with the world power, with the “empire,” is not ready to do the same with its own people–and even less so if the issue is about accepting differences of opinion. It’s through strikes and blows that it tends to resolve any matter with its citizens.

The worst part is that many in the population have assimilated this modus operandi learned from Papa State, and it is thus that they prefer to resolve any problem, with or without reason: by hitting.

Any male or female citizen in Cuba, however peaceful he or she may be, is exposed to the blows that come directly from the State, or from any of its many Frankensteins, its “New Men” as evoked by Guevara, who prefer to use their neighbors as punching bags before resolving differences through dialogue.