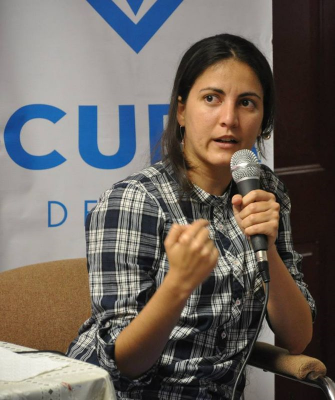 The struggle for freedom in Cuba is not for anyone afraid of what appear to be insurmountable odds or without the faith to believe that they will eventually prevail. After more than 56 years of communist dictatorship, winning Cuba’s freedom is not a task for the meek or the faithless.

Rosa Maria Paya is neither.

She is committed to change in Cuba but not change for change’s sake or as she puts it, a “fraudulent change” — for example, economic “reforms and and the normalization of relations with the U.S. — that leaves the dictators in power. But a change based on the will of the Cuban people.

To determine that that will, Paya and others have launched the CubaDecide campaign, which seeks a national plebiscite to ask Cubans what they want for their nation and their futures. Specifically, it wants to put on a ballot this question:

“Are you in favor of free, just and pluralistic elections that give all Cubans the right to be nominated and elected democratically; the freedom of expression and of the press; the right to organize freely into political parties and other social organizations? Yes or No?”

CubaDecide is extension of her late father Oswaldo Paya’s Varela Project campaign, which in 2003 presented to the Castro regime thousands of petition signatures demanding a similar referendum. The regime responded with the “black spring” crackdown that left several Varela Project organizers — but not Paya — in prison.

Rosa Maria, 26, assumed her father’s mantle after he died in a suspicious car crash in 2012 that his daughter and others have blamed on the Cuban secret police.

Paya and other CubaDecide organizers were in Tampa this weekend to debut their campaign in the United States.

“Everyone needs to help us exert pressure and spread the word that Cubans have the right to choose their government,” Paya told the Tampa Tribune before her visit. “No matter your party or political affiliation, this is about supporting real change in Cuba.”

Before a full house at Casa de Cuba, Paya laid out her simple but very powerful message for the Castro dictatorship and the world: Cubans must be free to decide their future.

Paya is not a wild-eye idealist. She understands the magnitude of the challenge — she knows what happened to her father and to many of his followers. And she understands that the Castro regime is not about to allow a national referendum on a question whose answer could mean their demise.

But as she repeated many times, change will not happen unless she and other Cubans demand it. If not know, when? If not us, who?