We will soon see who Pope Francis will choose to spend his time with when he arrives in Cuba. Will the island’s battered and beaten Catholic dissidents be ministered to by the Pope, or will the bulk of his blessings be reserved for the officials of the vile Castro dictatorship and the corrupted Catholic bishops?

The Ladies in White, wives and relatives of former political prisoners, submit request with evidence that activists ‘have been victims of repression’ recently 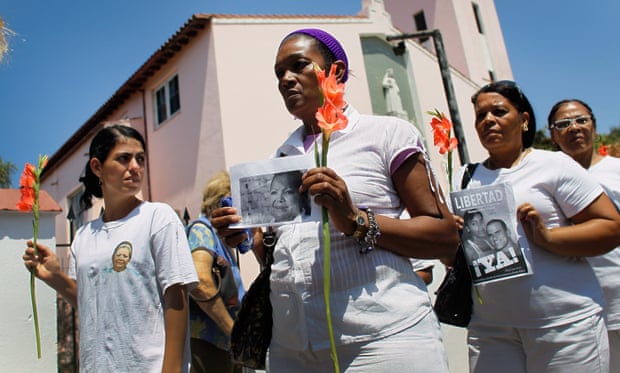 A prominent Cuban dissident group has asked to meet Pope Francis during his upcoming visit to Cuba in September, its leader said on Thursday.

The Ladies in White, made up of the wives and relatives of former political prisoners, visited the Vatican’s mission in Cuba to submit their request.

Group leader Berta Soler said she has passed along information about human rights in Cuba to Vatican officials, including “evidence of ladies and activists who have been victims of repression in recent weeks”.

She has also expressed concern that the government will prevent dissidents from attending the pope’s masses while in the communist country.

Ladies in White is the only group in the single-party country permitted to stage weekly marches in a specific area.

The Ladies in White was created after the so-called “black spring” of 2003, when Cuban authorities rounded up 75 dissidents and sentenced them to lengthy prison terms.

During his visit to the island in September, the pope is scheduled to give two outdoor masses, one in Havana.

He is also set to meet with President Raúl Castro, who recently began a warming of ties with the US alongside President Barack Obama, after decades of enmity.

The Vatican was a key interlocutor in the secret negotiations that preceded the thaw.

Pope Francis will travel to the US after the Cuba visit.