Back in March of 2007 our friends at Frontpage Magazine featured a symposium on what Raul rule would mean for Cuba.

Let’s see how the predictions turned out, SHALL WE?

By this stage of the game most folks hereabouts must know full-well who was drafting the “predictions” of symposium participants Julia Sweig and Phil Peters. So–mostly for fun– I’ll focus on the predictions for Cuba under Raul Castro by National Review’s Cuba “expert” Mario Loyola.

In addition to fun, these demonstrate the influence of Cuba “expertise,” on “respectable” and “scholarly” conservative circles. Look who sides with whom in this symposium…I mean, if National Review can fall for the disinformation parroted by Cuban agents-of-influence Sweig and Peters, who’s safe?

…In brief, it’s a jungle out there when it comes to Castroite disinformation, amigos. So you’d be well advised to stick with Babalu Blog. The best proof for this recommendation follows here:

Humberto Fontova: “No Glasnost in Cuba, that’s my reading. Perhaps a cosmetic shift from Stalinism to Khruschevism–but nothing on the order of Gorbachevism… Raul and his military cronies have been running Cuba–the nuts and bolts of the thing –for years already, and doing quite well in the process. That Cuba’s military robber barons would voluntarily upset their own apple carts, strikes me as extremely unlikely. There’s no incentive for it…As for Cuba’s immediate future, I’ll defer (with a heavy heart) to a Talking Heads lyric: “Same as it ever was.”

*******************************
Mario Loyola: “Interestingly, the Communist icon to whom Raul has most approvingly referred is Deng Xiao-Ping in the 1970s. This suggests what many of us have suspected for a long time. Raul may be sanguinary, and corrupt, and not terribly smart –but at least he is much more practical than ideological or revolutionary….I continue to believe that the Helms-Burton legislation (the Cuba Embargo) should be killed just on the grounds that it places an important area of foreign policy under the control of Congress…With Raul Castro and Carlos Lage at the helm, incremental reform is coming to Cuba…”

* “The portrait that appears of Raul is that he is not ideologically driven and is a communist mostly out of an apparent desire to be a good team player and a devoted little brother… The fact is that, as Ms. Sweig suggests, he has neither the charisma nor force of will to rule by the combination of repression and cult-of-personality that sustained Fidel’s absolute grip on power. Raul is not interested in absolute power”,

* “It is the things Raul needs to do in order to maintain his powers and comforts that will create opportunities for positive change in Cuba. If he (Raul Castro)  tries to rely on repression and cult-of-personality, he is not likely to survive long.”

* “Having been raised in a Cuban family, and being a great lover of things Cuban in general, I am not afraid to point out some of the more unfortunate tendencies in the Cuban character. Among the most unfortunate are a great capacity for intransigence, and a great capacity for holding personal grudges until the end of time. Both tendencies are codified in Helms-Burton and forcibly made the basis of U.S. Cuba policy.”

* “Let us hope that current efforts to kill most of the Helms-Burton legislation (the Cuba Embargo)  prove successful quickly. Change could come very fast to Cuba — especially if change can manage to come to U.S. policy… Whatever the answer there, it seems likely that Cuban exiles are going to have to get over their personal animosity towards the communists.”

Julia Sweig: I have to say that my “take away” from this last round is a feeling of exhaustion. Mr. Loyola and Mr. Peters I think present the best path forward – realistic, humane, unsentimental even. Mr. Fontova’s obsessive focus on the Castro brothers is counterproductive.”

Some of my fellow panelists are often feted as honored guests of Cuba’s Stalinist regime and have many contacts within it. Their writings are often showcased by the official publications of Cuba’s Propaganda Ministry. These panelists have an obvious agenda regarding U.S.– Cuba policy…I scrounge and scrounge and scrounge for any evidence that Cuba is responding to the medicine prescribed by free-market ideologues and instead see the patient worsening.

Obviously I excerpted heavily. This is the age of twitter and Facebook after, all. For those who fear I may have placed statements “out of context” I invite them to read the entire thing here. 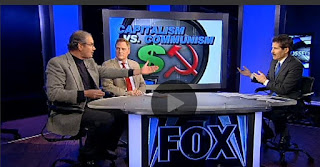