Of all the people from different nations who have wickedly exploited the Cuban people and enjoyed great pleasures on the island at the expense of the ruthlessly enslaved population, Canadians are by far the worst offenders. Canada has sent everything to Cuba from profiteers to pedophiles, all of them looking for illicit treasures and pleasures they could never find in a country where the rule of law is respected and the people are protected from predators. To those Canadians, Cuba is one big human pie they can gorge on and they are not looking forward to sharing it with anyone else.

As an interesting side note in the following article, observe how even expat Canadians living in Cuba are reluctant to share their last names. Just like the Cubans they exploit and prey upon, they have learned to be submissive and fearful of the vicious regime, which can make them disappear at any moment if they step out of line.

While Cubans ready for American visitors, Canadians in Havana roll their eyes 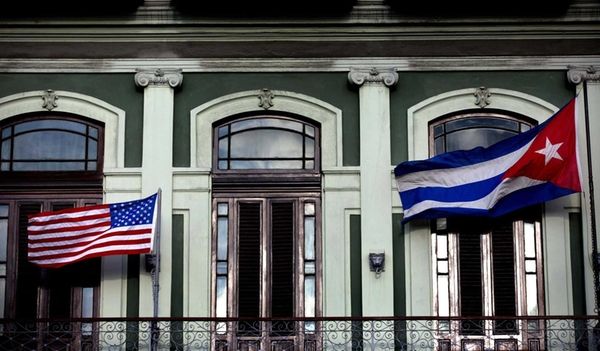 When a fleet of yachts and schooners from Key West, Fla., sailed into sunny Havana Harbor on May 20, the American flags they flew waved at Cubans lined along the slimy seawall. The Cubans not only waved back but also whistled and flashed two-finger victory signs.

High above in a powder-blue sky, a man in a motorized parasail continuously circled the watercraft like a bird of prey. Only this winged wonder buzzed along with an American flag trailing in the wind, the ultimate one-man welcoming committee.

“This is awesome,” Rio O’Bryan said, shaking his head from the deck of the After Fish, a 36-foot cruiser carrying a crew of 15. “This is so awesome,” the Errol Flynn in “Captain Blood” look-alike repeated.

“This is awesome,” Rio O’Bryan said, shaking his head from the deck of the After Fish, a 36-foot cruiser carrying a crew of 15. “This is so awesome,” the Errol Flynn in “Captain Blood” look-alike repeated.

For the first time since the early days of the Cuban revolution of 1959, the American flag waved in the harbor in which Christopher Columbus and crew once docked. A lovefest between the Cubans and Americans had erupted.

However, not everyone loves Americans in Cuba, especially other foreigners. Canadians and Europeans make up the bulk of visitors to the island long forbidden by the government of the United States. And these outsiders would like to keep it that way.

“There is tremendous resentment toward Americans by foreigners here,” said a man in his 60s named George from his perch in the Pasteleria Francesa, a French bakery in central Havana. Somewhat gaunt and with a good head of grayish hair, George preferred to give his opinion rather than his surname.

The retired educator said he has been speaking with other Canadians, Europeans, and South Americans in Havana over the last 28 years. He sits at his favorite table, from which he surveys everyone at other tables on the patio, and discusses events of the day. The current topic is how President Barack Obama on Dec. 17 announced a plan to restore full diplomatic relations with Cuba and reopen the embassy. This paves the way for Americans to experience that which Canadians, Germans, Italians, Spaniards, Venezuelans, Ecuadorans, Australians, Chinese and Japanese have been enjoying for the last 55 years: heavenly tropical beaches, pristine fishing waters, sublime seafood, original Latin rhythms, sultry senoritas, sweet rum and the best cigars in the world.