For the courageous human rights and democracy activists in what now can be called Obama’s Cuba, Sundays have become a day of brutal repression and violent arrests carried out by the State Security apparatus of the Castro dictatorship. For the 16th consecutive Sunday, the Castro regime has unleashed a wave of terror against peaceful human rights activists, the majority of them defenseless women.

The truth is that except for one thing, absolutely nothing has changed in Cuba since Obama surrendered to the Castro regime. But that one thing is no small detail: Not only does the Castro regime no longer fear their bloody oppression will have any consequences as far as the U.S. government policy is concerned, they now have assurances from President Obama that he will look the other way and if need be, help them cover up their crimes against humanity.

Welcome to the era of Obama’s Cuba…

A report on yesterday’s violence in Cuba via Capitol Hill Cubans:

Over 60 Political Arrests Today, 630 in June 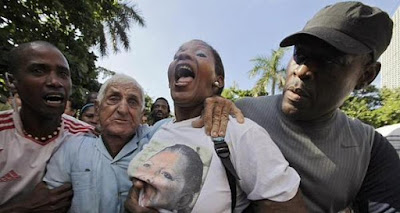 The Castro regime continues to make a mockery of Obama’s deal.

Over 60 Cuban dissidents were arrested today. They include Lia Villares, the young blogger leading a campaign for the release of artist Danilo Maldonado, known as “El Sexto,” who has been imprisoned since December 25th, 2015 — just one week after the Obama-Castro deal.

Meanwhile, the Cuban Observatory for Human Rights has documented 630 political arrests throughout the month of June 2015 — the highest monthly tally this year. Of those, 340 were female democracy activists.

In other words, while the Obama Administration and the Castro dictatorship were celebrating renewed diplomatic ties, a record number of dissidents were being arrested.

But the mockery doesn’t end there.

Also this week, Jorge Ramirez Calderon, one of the political prisoners released pursuant to Obama’s deal, was notified that he is now facing a 4-year sentence for “public disorder.”

His crime? Participating in a March 28th protest in the town of Manicaragua, for which he was severely beaten and arrested.

And independent journalist, Lazaro Yuri Valle, along with democracy activist, Yasser Rivero Boni, were beaten and arrested for filming an area of Old Havana where a building collapsed.

Here’s what Yuri Valle reported about the spike in repression that’s currently unfolding:

“The beatings are merciless, the repression has gotten completely out of hand.  An elderly man, who had open heart surgery, was thrown into a police truck like an animal. Things are out of control. Not only do they send the police to beat us, but also mobs are set loose on us. They hit us however and wherever, anyone can be hit or stabbed, or pricked with needles, as they have been doing.”

Sadly, these are the extraordinarily courageous people being thrown by the wayside by Obama’s new policy.

More than 60 members of the Cuban Damas De Blanco, or “Ladies In White,” and other peaceful activists were arrested Sunday in Havana, the latest replay of the Castro dictatorship’s intolerance for any opposition activities — especially if it’s by a bunch of women carrying flowers.

That’s at least 16 straight Sundays of repression, a wave of brutality that started after President Barack Obama announced he had cut a deal for diplomatic recognition with the dictator Raul Castro, and has continued with full force since the opening of an American embassy in Havana. After all, why should Castro change how he deals with the Cuban people when when that type of change was not part of the agenda for a legacy-seeking American president?

Numerous sources on the island spent the day tweeting details on what happened today.

1 thought on “Hope and Change in Obama’s Cuba: Another Sunday of brutal repression with more than 60 activists violently arrested”