How the Tail (Castro) is Wagging the Dog (Obama and U.S. Business) 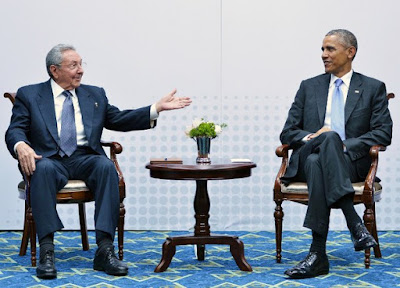 How could that be?

On the day after Obama’s announcement (December 18th), the same newspaper reported, “The White House’s decision to ease sanctions on Cuba and improve America’s relationship with the Castro regime could reignite economic ties with the island nation, foreign-policy experts say.”

Ponder this — President Obama has done diplomatic contortions for the Castro regime; it has unilaterally eased sanctions, in order to decrease transaction costs for authorized exports; and it has stimulated a 36% increase in American travelers (carrying new cash) to the island.

Yet, despite what “experts” predicted, exports have plummeted.

The answer is simple: Because in Cuba there’s only one buyer — the Castro regime.

And that buyer is now playing hard to get — for it wants even more (for nothing in return).

Despite the Obama Administration’s lofty rhetoric about the Cuban people, every single “foreign trade” transaction with Cuba must be made with a Castro-owned entity. The regime’s exclusive right to trade and control investment is enshrined in Article 18 of Castro’s 1976 Constitution.

In the case of agricultural commodities, Castro’s monopoly is called Alimport.

As the U.S. Department of Agriculture itself recognizes: “The key difference in exporting to Cuba, compared to other countries in the region, is that all U.S. agricultural exports must be channeled through one Cuban government agency, Alimport.”

After all, why would Castro spend any more hard currency, when —

It has U.S. Senators Jeff Flake (R-AZ) and Patrick Leahy (D-VT) lobbying to provide his regime with billions in tourism income;

It has U.S. Senators John Boozman (R-AR) and Heidi Heitkamp (D-ND) lobbying to provide his regime with private financing;

It has U.S. Rep. Tom Emmer (R-MN) and U.S. Senator Amy Klobuchar (D-MN) lobbying to lift all sanctions on his regime’s monopolies;

It has former Secretary of Commerce Carlos Gutierrez lobbying for international financial institutions to provide his regime with loans and lines of credit;

It has U.S. agribusiness and travel companies on a full-out lobbying offensive; and

It has President Obama fully committed to a dictator-down-economics approach.

Why would Castro spend any more hard currency, when —

The tail is clearly wagging the dog.

1 thought on “How the tail (Castro) is wagging the dog (Obama and U.S. business)”