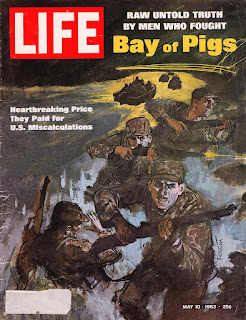 “I see that the flagpole still stands,” said a choked-up Gen. Douglas Mc Arthur on March 2, 1945 as he entered devastated but liberated Corregidor. “Have our troops hoist the colors to its peak, and let no enemy ever haul them down.”

At the time of that flag-raising paratrooper Manuel Perez-Garcia had fought almost constantly for 14 months, through New Guinea and the southern Philippines. His purple hearts, Bronze Star and Silver Star with Oak Leaf Cluster said something about his role in that victory for freedom. We can only imagine how he felt when he finally saw his beloved stars and stripes fluttering over Corregidor.

When Perez Garcia was 51 years old the Castro brothers and Che Guevara were busily converting his native country into a Soviet satrapy riddled with prison camps and mass graves. So Manuel volunteered for combat again. Like most of his Cuban Band of Brothers he fought to his very last bullet, inflicting casualties of 20 to 1 against his Soviet armed and led enemies. That bitter and bloody battleground is now known as The Bay of Pigs.

Manuel Perez-Garcia passed away in Miami at the tender age of 102 in 2011. Today his ashes along with those of his son rest in Arlington. Maybe he’s lucky not to witness his beloved flag raised in Castro’s Havana, within walking distance of political prisons and torture chambers, a smirking Che Guevara mocking it from banners and murals in every direction.

For Manuel Perez-Garcia and his Band of Brothers that flag symbolized victory and freedom. In Havana today it symbolizes U.S. surrender to the Stalinist cowards who destroyed and defiled their homeland, and craved to nuke their adopted one.

Our friends at Townhall help disseminate some items almost utterly unknown except for in a few teenzy-tiny ethnic enclaves in south Florida and northern New Jersey.