There is no doubt that President Obama and Secretary of State John Kerry’s decision to shun Cuba’s dissidents and ban them from the opening of the U.S. embassy in Cuba last week was a cowardly and reprehensible act. Nevertheless, even the most contemptible and disgraceful actions taken by dishonest and shameless charlatans can work in the favor of the sincere and the virtuous they aim to harm. As Capitol Hill Cubans points out, the U.S. government’s craven decision to ban the courageous leaders of Cuba’s opposition from the U.S. ceremonies last Friday in Havana actually worked in their favor. By not being present, these gallant champions of human rights and freedom were spared the shame of being part of the despicable display of surrender and submission to a viciously repressive apartheid regime carried out by Obama and Kerry.

On Second Thought, Am Glad Cuban Dissidents Weren’t at Embassy 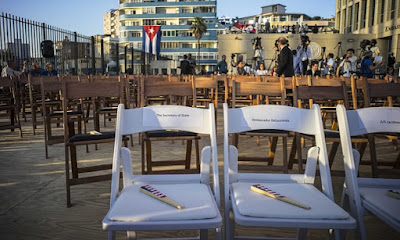 Undoubtedly, for the Obama Administration to shun Cuban dissidents from the flag-raising ceremony at the new U.S. Embassy was a major policy blunder — not to mention a betrayal of America’s principles.

The editorial boards of The Washington Post and The Wall Street Journal have eloquently expressed why — as has The Miami Herald‘s Andres Oppenheimer.

Moreover, for U.S. Secretary of State John Kerry to argue that dissidents were excluded from the Embassy event due to “limited space” was pathetic.

As a matter of fact, as CNN‘s Jake Tapper, clearly revealed — it was a lie.

Kerry’s other excuse — that it was a “government-to-government” event — was also a lie.

Sadly, this lie was regurgitated by former U.S. Secretary of Commerce Carlos Gutierrez during an MSNBC interview from Havana.

If it were a “government-to-government” event — then what was he doing there?

Last we checked, Gutierrez was not a member of the Obama Administration (yet).

Perhaps he was measuring the curtains at the Ambassador’s residence, but that would still require his nomination and confirmation by the Senate — big if’s, which would surely require a probe into his clients at The Albright Group, potential conflicts-of-interest and consulting for foreign governments.

It would also raise the questions:

Would (did) the Castro regime require Gutierrez to use a Cuban passport, as it does anyone born in Cuba?

Would (did) it make Gutierrez go through the same humiliating vetting process that it makes all Cubans go through, in order to get a visa to their homeland (which violates international law)?

Of course, the Obama Administration wouldn’t care about any of this, as it has already accepted Castro’s restrictions on U.S. diplomats, in contravention of the Vienna Convention on Diplomatic Relations.

But back to the Kerry/Gutierrez “government-to-government” lie.

If it was a “government-to-government” event, then what were all those lawyers, lobbyists, publicists, small bankers, talking heads and business bottom-feeders doing there?

Were any of them more worthy of a seat in that ample courtyard than those Cubans who — on a daily basis — sacrifice, blood, beatings, tears, humiliation, imprisonment and risk death for the cause of freedom, democracy and rights for all Cubans?

Thus, in hindsight, after seeing the moral mediocrity — with the exception of three U.S. Marines — that populated the Embassy’s courtyard on Friday morning, it was clear that no one there was worthy of the presence of Cuba’s courageous dissidents.

While those in the courtyard will barely consist of a footnote.