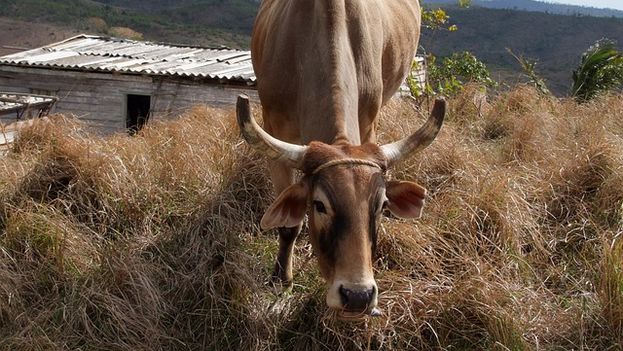 14ymedio, Jose Quintana de la Cruz, Pinar del Rio, 31 August 2015 – Cattle ranching in Cuba touched bottom in 1999, but it had started its decline in 1970. That year’s effort to produce 10 million tons of sugar was the focus of attention and resources for the entire nation. Such a disproportion was detrimental to the the motto of centralized planning: wielding economic harmony and proportionality.

The setback in the care and breeding of cattle came after a remarkable success in the cattle industry until 1968. In the sixties, mass vaccination increased the heads of cattle from just over 5 million on the island in 1958 to 7.5 million. The increase was the result of importing breeding stock from Canada, the massive use of artificial insemination and good animal husbandry and veterinary management. This improved the quantity and quality of the herds.

However, in 1968 a decline in the number of cattle began that is not yet over. Alarms sounded in 1999 when Cuba had 3 million fewer head of cattle than in 1968. Of the numbers lost, at least 1.9 million were heifers, which considerably affected the base of reproduction, the guarantee of future herds.

Many analysts attribute the livestock crash to the Special Period, officially decreed in 1990, that came with the collapse of the European socialist bloc. These analysts argue that the sectors loss of supplies was the main reason for its collapse. Obviously this was an influence, but the evils that became chronic in the nineties had originated almost three decades earlier.

In 1985 the warning signs were already clear: the country had 2.2 million fewer heads of cattle than in 1968. At a time when the Soviet supplies were still being received with both hands. What had happened was that the resources needed for livestock were being reassigned to other destinations by the Cuban government. Basically to the sugar industry, which, in the end, also collapsed.

On the other hand, poor reproductive cycles have affected the replacement of slaughtered animals. A cow should be ready to reproduce at two years of age and give birth to a calf every 13 months until she has achieved 4 or 5 births during her reproductive life. But in Cuba many of these adult heifers only give birth to between 2 or 3 calves during their lifetimes.

The difference compared to the sixty years ago is staggering. In 1954 Cuba had 0.9 heads of beef per capita, an indicator where it was only surpassed in the region by Uruguay with 3.01, Brazil with 2.39, and Argentina with 1.01. Today, however, the Pearl of the Antilles has only 0.4 starving heads per capita.

Milk production has also failed to take off despite the government call to prioritize it. Between 2013 and 2014 it declined slightly this year could decline still more. In the Camaguey region, known for its cattle tradition, is trying right now to mitigate the effects of the severe drought to ease the lack of milk production. Other provinces are worse.

Hunger, the deficient planting of pastures, disease, legal and occasionally illegal slaughter caused by poor management, and the lack of economic incentives, stand as the chronic internal causes of the livestock disaster in Cuba. At the end of 2014, the number of cattle in the entire country reached 4.1 million. This year the lack of rainfall has forced massive slaughter of cattle that will surely adversely affect that figure.

Cubans should prepare for even less milk and less beef on their tables.