Yesterday, for the 21st consecutive Sunday, the apartheid Castro dictatorship unleashed another wave of violent repression against peaceful human rights activists on the island. More than 60 dissidents were violently arrested for the crime of gathering together and carrying out a silent protest march in public. Making this Sunday’s violence all the more troubling was Cuban State Security’s arrest of former minister and current member of the Chilean parliament Felipe Kast, who was in Cuba and joined the dissidents yesterday to march with them in solidarity with their cause.

Nevertheless, in spite of the apartheid regime’s increasingly bold acts of repression and human rights abuses, the Obama administration and the State Department are simply looking the other way. Obama’s “Hope and Change” policy in Cuba is more important than a few thousand Cuban dissidents being viciously beaten and jailed.

Chilean Legislator (and Former Minister) Arrested in Cuba Today, Along With Over 60 Dissidents 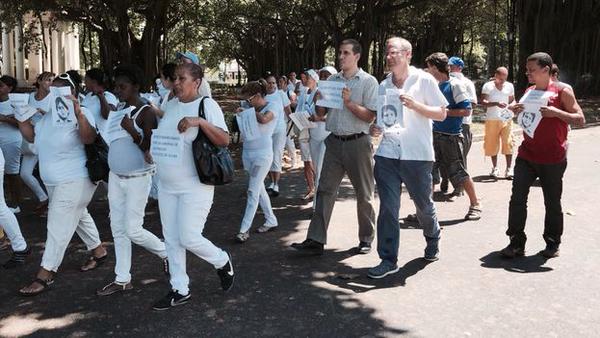 For the 21st Sunday in a row, over 60 Cuban democracy activists were arrested today, pursuant to attending Mass in Havana.

Among those arrested were 49 members of The Ladies in White, the renowned organization composed of the mothers, wives, daughters and other relatives of Cuban political prisoners, along with 15 other activists.

Also arrested was Felipe Kast, a young Chilean legislator and former Minister of Planning under the government of former President Sebastian Piñera.

Kast was violently beaten and detained with the group of Cuban democracy activists.

In the images below, taken prior to his arrest, Kast can be seen (with blonde hair and glasses), peacefully marching alongside Cuban democracy leader Antonio Rodiles.