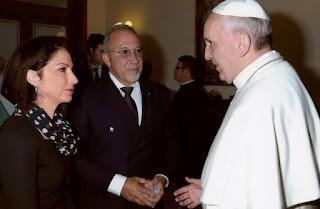 “Celebrities including Jennifer Hudson, Gloria Estefan, Aretha Franklin and Andrea Bocelli will be performing at papal events in New York City and Philadelphia. Pope Francis is visiting those cities, as well as Washington, during his first trip to the United States from Sept. 22 to Sept. 27….Officials with the Archdiocese of New York announced performers for an afternoon concert at Madison Square Garden on Sept. 25…”

“And behind all this pain, death and destruction there is the stench of what Basil of Caesarea called ‘the dung of the devil’ – an unfettered pursuit of money”, the Pope said.

“When money becomes a person’s god, he said, greed becomes the chief motivator of what people do…it ruins society, it condemns and enslaves men and women, it destroys human fraternity, it sets people against one another and, as we clearly see, it even puts at risk our common home.” (Pope Francis, Nov. 24th, 2013.)