“During their meeting the Pope thanked comrade Fidel Castro for his contributions to world peace in a world saturated with hate and aggression.“ 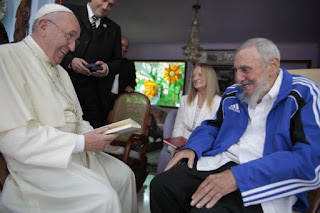 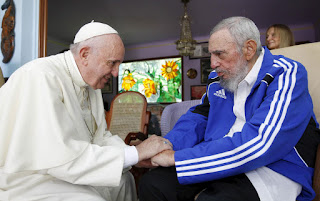 “What?!” Khrushchev gasped on Oct. 28th 1962, as recalled by his son Sergei. “Is he (Fidel Castro) proposing that we start a nuclear war?! That we launch missiles from Cuba?!”

“Yesterday the Cubans shot down a plane (U-2 with) without (Soviet) permission. Today they’re preparing a nuclear attack!”

“But that is INSANE!..Remove them (our missiles) as soon as possible! Before it’s too late. Before something terrible happens!” commanded the Soviet premier.

“Of course I knew the missiles were nuclear- armed,” responded Fidel Castro to Robert McNamara during a meeting in 1992. “That’s precisely why I urged Khrushchev to launch them. And of course Cuba would have been utterly destroyed in the exchange.” 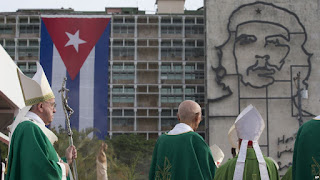 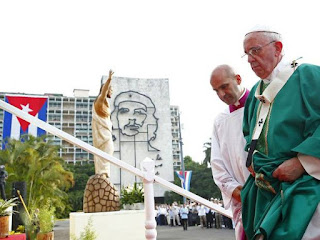 “Hatred is the central element of our struggle!… Hatred that is intransigent…Hatred so violent that it propels a human being beyond his natural limitations, making him violent and cold- blooded killing machine…We reject any peaceful approach. Violence is inevitable. To establish socialism rivers of blood must flow.”…If the nuclear missiles had remained (in Cuba) we would have fired them against the heart of the U.S. including New York City. The victory of socialism is well worth millions of atomic victims!” (Che Guevara.))

“Humberto Fontova has performed a great service for freedom and human decency. Every American should read this book.” (David Horowitz on Fidel: Hollywood’s Favorite Tyrant.)

5 thoughts on “Pope thanked Fidel Castro for: “his contributions to world peace in a world saturated with hate and aggression” (I am NOT making this up!)”