According to the Vatican and Papa Che, they were not aware of any arrests of dissidents that took place during the papal visit to Cuba. Apparently they must have all experienced really bad cell phone reception in Cuba and at Fidel Castro’s compound and no one could seem to remember the WiFi network passwords, preventing them from getting the news of the arrests that were virtually broadcast live to the entire world as they happened. 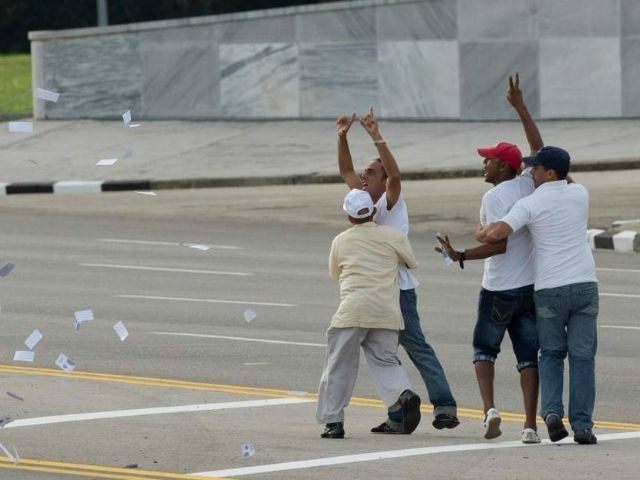 As the Cuban government begins to free dissidents, imprisoned to keep them from potentially disrupting Pope Francis’s visit with their presence, dissident organizations are releasing statistics on just how many people were arrested.

One organization reports that between 250-300 people were detained for their political beliefs, just in case they had planned to express them around the Pope.

The Patriotic Union of Cuba (UNPACU), a pro-democracy group, issued a press release today listing 142 members of its organization that had been detained during Pope Francis’s visit to the country. According to the release, while many were arrested all around the island, 105 people were arbitrarily arrested in Santiago de Cuba, which Pope Francis visited on his last day in Cuba. Santiago is on the eastern end of the island, far from Havana. The other members were arrested in western Pinar del Río, Habana, Holguín, and Guantánamo. Many of those arrested reported being physically assaulted by police.

“If 142 UNPACU members have been arrested, the total number of those detained from different organizations should be around 250 to 300 activists,” the group estimates.

In addition to UNPACU members, at least 24 members of the Cuban Ladies in White group—composed of predominantly Catholic female relatives of political prisoners—were detained during the Pope’s Mass in Havana’s Plaza of the Revolution. The leader of the organization, Berta Soler, reports being “dragged by the hair and neck” into a car by policemen, who later hurt her hands as punishment for attempting to attend the Mass.

Soler and other dissident members were allegedly invited to meet with Vatican officials, according to spokesman Rev. Federico Lombardi, who said he “did not know” why they did not attend a meeting while the Pope was in Cuba. Pope Francis himself said that he “did not know” and had “no news regarding detentions.”

“The Pope did not utter a phrase of solidarity with the victims of repression and, when traveling from Cuba to the United States, told the press that he did not know about the detention of pacifist dissidents,” the UNPACU press release reads. It notes that one UNPACU member, Zaqueo Báez, was arrested in front of Pope Francis. “While they [Pope Francis and Báez] spoke, event security tackled Zaqueo Báez strongly and tore him violently away from the Pontiff, ending thus his conversation with the Pope. The Pontiff… saw in first person how he was violently expelled and detained along with three other UNPACU activists.”