Russian Ambassador Thanks Cuba For Supporting its Actions in Syria 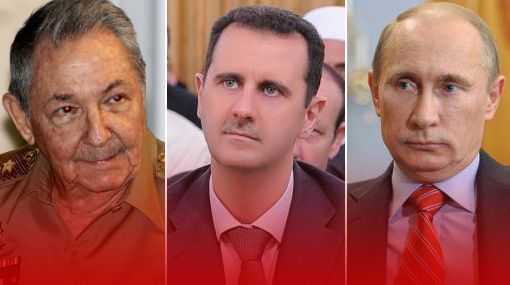 Less than 24 hours after the Castro regime vaguely denies reports of a Cuban troop presence in Syria, both Cuban and Iranian state media publish stories of a gathering at the Russian Embassy in Havana with Syria’s Charge d’Affaires, whereby the Russian Ambassador thanks Cuba for supporting its actions in Syria.

Click here for the version in Iranian state media.

The Syrian community in this country thanked today Russia’s support in fighting terrorists in the Levantine state, and emphasized respect for international law in that solidarity action.

The Charge d’Affaires of the Syrian embassy in this capital, Loai Aloja said at a meeting in the Russian embassy that Moscow’s military actions in Syria are in defense of the international law and the UN Charter.

In front of 50 representatives of the community of his country in Cuba, Aloja stressed that Russia not only defends with its actions the Syrian people, but also the entire world.

The Arab diplomat denounced how imperialism and its agents overthrow legitimate governments, on the contrary of what Russia does.

“Moreover, what is happening now in Syria is also part of the own resistance of our people,” the official said, referring to the progress achieved in the military field these days.

Western countries met in Syria all the world’s terrorists to kill our citizens, Aloja denounced.

“We are and will be friends of Syria,” Russian ambassador to Cuba, Mijail Kaminin stated for his part, who said his country was fighting against terrorism and respect for international law.

“We are in Syria at the request of its legitimate government,” said the Russian diplomat, who considered the Islamic State terrorist group as a threat for all human beings.

He also thanked Cuba’s support to Russia’s actions to restore peace in the Levantine country.