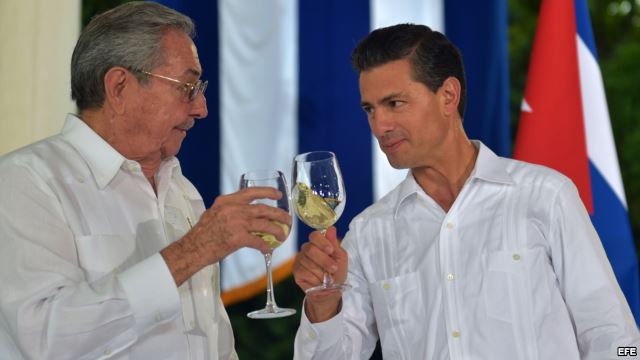 In pitching the Obama Administration’s new Cuba policy to Congress, Roberta Jacobson, the U.S.’s Assistant Secretary of State for the Western Hemisphere, testified to the Senate Foreign Relations Committee on May 20, 2015:

“We have begun to see the Administration’s new approach to Cuba providing space for other nations in the hemisphere and around the world to focus on promoting respect for human rights and fundamental freedoms in Cuba.”

Yet we’re still searching for what she’s “seeing” — without any evidence in sight.

Nope, quite the contrary actually.

From The Tico Times:

Cuban leader Raúl Castro received a warm welcome in Mexico on Friday as President Enrique Peña Nieto sought to end a diplomatic chill and boost business opportunities on the island.

With the colonial Caribbean city of Mérida serving as the backdrop, Castro was given red carpet treatment at the Yucatán state government palace for his first official visit to Mexico since taking power in 2006.

“Long live the indestructible brotherhood between the people of Cuba and Mexico,” Castro said as he delivered a speech alongside Peña Nieto following a private meeting.

For his part, Peña Nieto greeted Castro with an embrace and told him that “Mexico welcomes you with open arms.”