Yesterday marked the 31st consecutive Sunday of repression in Cuba as the Obama-backed apartheid dictatorship of the Castro brothers violently arrested nearly 300 peaceful dissidents and human rights activists. Ever since President Obama surrendered to the apartheid Castro regime and began the “normalization” process between the two countries, violent repression in Cuba has risen significantly. Nevertheless, the Obama administration continues to give concessions to the brutal Cuban dictatorship although the regime has given absolutely nothing in return. Cuba not only continues to be a totalitarian state, they have become bolder and more vicious in their repression since receiving the green light from the U.S.

Capitol Hill Cubans has the latest from the Hope and Change brutalizing Cuba’s dissidents: 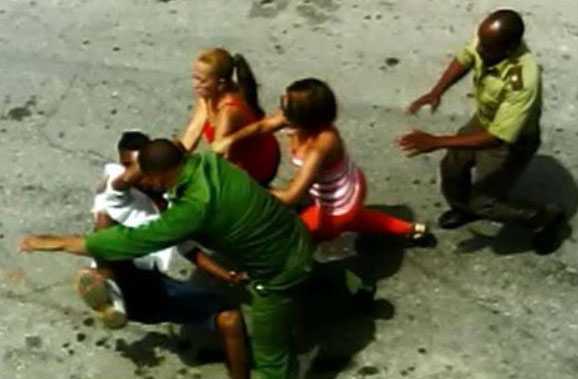 The human rights situation in Cuba is going from bad to worse under Obama’s blank check for the Castro regime.

For the 31st Sunday in a row, nearly 300 Cuban dissidents were arrested as they tried to attend Mass, then peacefully demonstrate as part of the #TodosMarchamos (#WeAllMarch) campaign.

In Havana, nearly 100 members of The Ladies in White — the renowned group composed of the wives, daughters, mothers and other relatives of Cuban political prisoners — were arrested.

Among those arrested was its leader, Berta Soler, who on Friday was threatened by Castro’s secret police that “her time in the opposition had come to an end.”

In the provinces, 98 activists from the Cuban Patriotic Union (UNPACU) were arrested in the eastern city of Santiago; 51 in Camaguey; 9 in Las Tunas; 9 in Guantanamo; and 12 in Holguin.