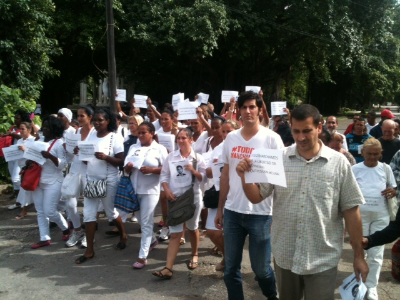 The Obama-backed apartheid Castro dictatorship in Cuba unleashed another Sunday of violent repression yesterday. As reports filter in from the heavily-censored island, Cuba’s Ladies in White organization is reporting as many as 70 dissidents were violently arrested yesterday. This marks the 32nd consecutive week of violence and oppression against peaceful dissidents and human rights activists in Cuba.

Reports from the island on yesterday’s repression have been even more scarce than usual this morning.  This lack of information is mostly due to the Castro regime cutting off the cell phone service of leading dissidents who participate in the weekly peaceful protest marches. One of the last messages to come out came from human rights activist Angel Moya, who sent out a tweet a little after 1:00 pm saying “They’re going to arrest us.”