The report via Notes from the Cuban Exile Quarter:

If liberty means anything at all, it means the right to tell people what they do not want to hear. – George Orwell 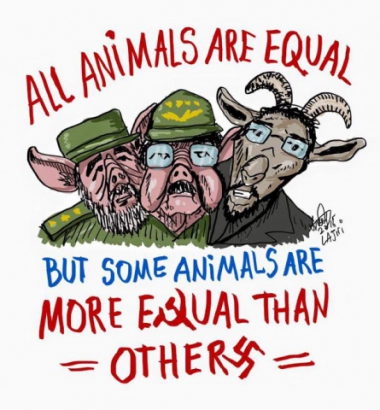 Amazing scene today at the King Mango Strut Parade in Coconut Grove where activists associated with the #TodosMarchamos (#WeAllMarch) campaign participated in this historic festival dedicated to satire and fun in Coconut Grove, Florida in its 34th edition.

The Cuban group joined the parade starting at 2pm making a satire of George Orwell’s Animal Farm wearing masks,  carrying posters and dancing a conga with a live band.

The organizers of the event said that there objective was to “recontextualize George Orwell’s fable within the present situation in Cuba, the re-establishment of relations with Washington DC, the increase in repression and the campaign #Todos Marchamos (We All March).

The activity was carried out by the organizing committee of #Todos Marchamos (We All March) in Miami and in the action the following artists and activists from the island took part: Danilo Maldonado, El Sexto, Lía Villares, Gorki Águila and Ailer González Mena.