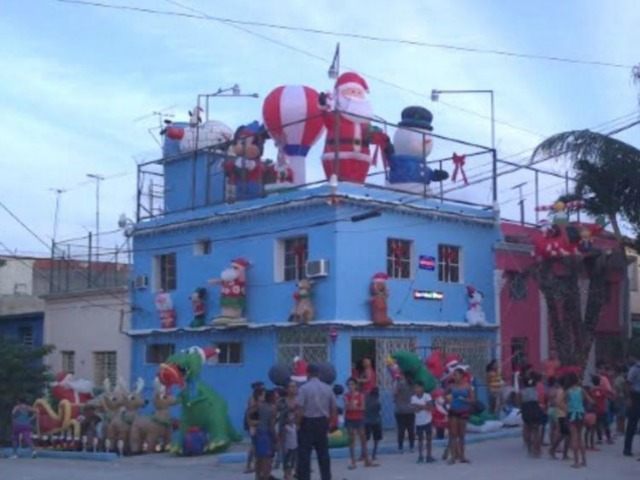 Seventy-year-old Cuban-American Francisco Morales, who has lived in the United States for 40 years, was arrested in Cuba on December 23 for setting up a public Christmas display featuring an inflatable Santa Claus and Mickey Mouse.

The incident occurred at his family’s home in Havana, where Morales had set up the display on the rooftop, featuring lights and inflatable characters. The display had attracted the neighborhood’s children, who wanted to take pictures with Santa Claus, as well as Cuban state police, who swiftly took Morales away to a secure prison facility in the capital.

Morales was charged with “interrupting pedestrian traffic” and released after several hours of detention. An independent journalist filmed the scene outside his home, where incensed parents protested Morales’ arrest for bringing more sadness into the lives of their children. The children themselves also reportedly approached police, requesting they leave the display intact.

Following his release, Morales told the independent outlet Cubanet that he had been setting up a similar display at his family’s home for the past ten years. “I come to Cuba every year to visit my family for Christmas, and for the past ten years I have prepared a cartoon exhibition with animated characters and other images related to the holidays.”

“I asked [the state police] to consider the spiritual benefits of this sort of event for children, but they did not listen and threatened me with police action if I did not comply,” he added.

“I will not give up,” Morales added. “I am going to find another viable way for children to keep receiving the little bit of joy they so need. They deserve all the sacrifice in the world and I will continue to dedicate the rest of my life to this labor of love.”

Cuba joins the Islamist dictatorships of Tajikistan and Brunei in cracking down on public celebrations of Christmas, though the Cuban government has not issued an explicit ban, using tangential ordinances to end any hint of a celebration.