End Impunity: Truth and Memory three and a half years after Oswaldo Payá and Harold Cepero killings

“Three and a half years since the attack that took away #OswaldoPayá and #HCepero. Their hope remains #EndImpunity” – Rosa María Payá Acevedo, over twitter in Spanish and reproduced below 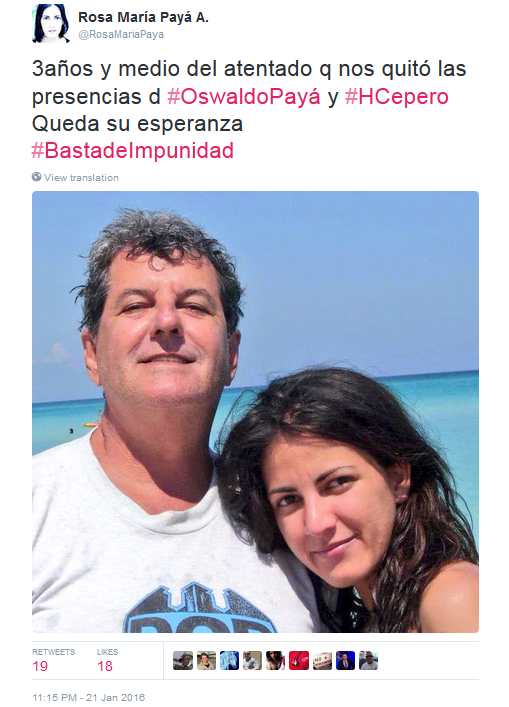 Today marks another sad anniversary that a daughter observed posting a picture from better days when her dad was still alive. The tragedy is that Oswaldo Payá Sardiñas was murdered by agents of the Cuban dictatorship along with Harold Cepero, a young man who was a friend of hers and a youth leader in his nonviolent democratic movement.  Three and a half years later and the evidence that an extrajudicial execution was carried out by Castro’s state security service has piled up and petitions made to the UN Human Rights Council and Inter-American Commission on Human Rights but nothing has been done and the killers remain at large and unidentified.

Young members of the Free Cuba Foundation in an open letter replying to Cuban American businessmen advocating engagement with the Cuban dictatorship and the Obama administration’s “new policy” of unilateral concessions to the regime that began in 2009 made reference to both of them. The bitter harvest of this approach can be seen in the high profile body count generated. The December 17, 2014 announcement by President Obama doubled down on this policy that has been hostile to Cuba’s democratic aspirations.

2 thoughts on “End impunity in Cuba: Three and a half years after assassination of Oswaldo Paya”