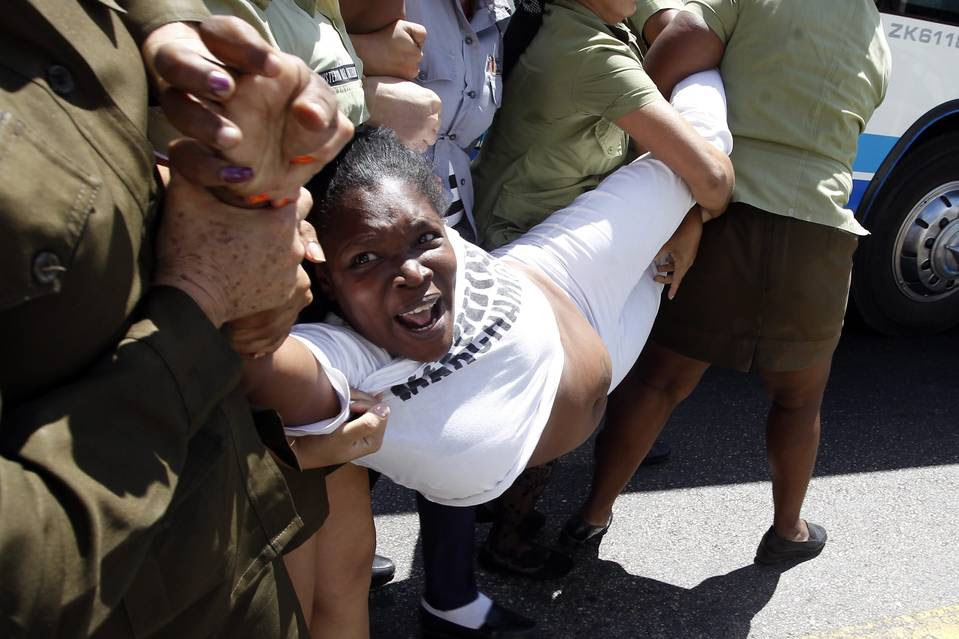 As Obama prepares to arrive in Havana, dissidents say repression by Raúl Castro’s government hasn’t let up for those daring to speak out

About 30 anti-government protesters gathered at this city’s Mahatma Gandhi Park on Sunday and unfurled a banner in anticipation of President Barack Obama’s groundbreaking visit next week. “Obama, Cuba has a dream,” it read. “Cuba without Castros.”

They were soon surrounded by an angry crowd, followed by Cuban security officers who tore the banner from their hands, hustled them into police cars and took them away.

Some arrested demonstrators said they were kicked, hit, pushed to the ground and stripped naked before being released hours later. Their treatment was part of a more general crackdown on dissidents as the U.S. president prepares to arrive in Havana on Sunday.

Since the U.S. began normalizing relations with its long-standing political foe in December 2014, tourism here has flourished, making central Havana bustle with new restaurants, hotels and gift shops. But in crumbling neighborhoods outside the elegant tourist areas, residents say the repression by President Raúl Castro’s government hasn’t let up for those daring to speak out.

“Here in Cuba nothing has changed,” said Berta Soler, a member of a dissident group calling itself the Ladies in White, moments before she was arrested with those carrying the banner. “The Cuban government keeps trying to stop us, to demonize us, and we all live in fear.”

Ladies in White, whose members wear white to symbolize peace, are among the dissidents targeted in a wave of arrests around the island in recent days, say human-rights activists here and abroad. That comes in part because the dissidents have stepped up their activities as they strive to be noticed ahead of Mr. Obama’s visit.

More than 300 people have been arrested since March 8 in Havana, the eastern city of Santiago and elsewhere, said Ms. Soler and members of the Patriotic Union, another Cuban group. The dissidents say they get roughed up, threatened and dropped off in remote areas, forcing them to walk home in searing heat.

Officials at Cuba’s Foreign Ministry in Havana and its embassy in Washington didn’t respond to calls and emails seeking comment on the dissidents’ claims. But an editorial in Granma, the state newspaper that airs the state’s official position, said the U.S. “should abandon its pretense of creating an internal opposition, supplied with U.S. contributions.”

Four dissidents who had been repeatedly jailed were allowed this week to quietly leave Havana, Ovidio Martin Castellanos, a member of the dissident Cuban Patriotic Union, said in an interview on Thursday. Obama administration officials didn’t immediately confirm or deny the arrival of the dissidents on U.S. soil. “They know that these days there are foreigners and foreign press here,” Ms. Soler said of the Cuban government, “and they don’t want people to see the opposition and think it has too much support.”

“Here’s a good deal: Cuba has free elections. Cuba stops putting people in jail for speaking out. Cuba has freedom of the press,” Mr. Rubio said in a recent presidential debate.

Supporters of the detente say the U.S. has diplomatic and trade relations with many countries with far worse human-rights records than Cuba, including China and Saudi Arabia.

“But my goal is to remove barriers and create opportunities for the Cuban and American people,” he said. “The Cuban leadership may believe their repressive system can survive, but I don’t think future generations will put up with it.”

Human-rights activists such as Daniel Wilkinson, managing director for the Americas at Human Rights Watch, said when Mr. Obama meets with Mr. Castro he “needs to be clear, categorical and forceful, specific in denouncing the abusive practices and calling for steps by the Cuban government to address them.”

“If it ends up he spends the day just enjoying a baseball game with President Castro, it will undermine whatever message he has about human rights,” Mr. Wilkinson said.

Here in Cuba, dissidents are divided on detente and on Mr. Obama’s trip.

Aurelio González, member of an opposition group associated with the Ladies in White, was adamant that Washington’s new stance toward Cuba has done nothing to improve rights. “The U.S. has stopped supporting us from a moral point of view, from one of solidarity,” said Mr. González, who was also recently arrested.

Still, there are dissidents like Wilberto Parada, a member of the opposition Patriotic Union movement and one of more than 50 political prisoners the Cuban government freed in early 2015 in the wake of the re-establishment of relations between the two countries.

“We support the visit of Obama,” Mr. Parada, 44, said, sitting in the dim living room of a crumbling Havana apartment while his 5-year-old son scampered in and out. “But he needs to talk to the real members of the opposition here, to learn the truth.”

Ben Rhodes, deputy national-security adviser in the Obama administration, said the president would meet with “prominent dissidents, people who have made enormous sacrifices” in Cuba, but didn’t identify specific persons.

Last Sunday at Mahatma Gandhi Park, Ms. Soler fielded calls from relatives of at least 20 women she said were detained on their way to the demonstration. One was 37-year-old Maylen González, who said state security officers handcuffed her after she left her home and pushed her into a car. One guard pushed her head between her knees and another jammed an elbow into her back, she said.

“They are always violent,” said Ms. González as she sat stiffly in a rocking chair at Ms. Soler’s home the day after her detention. “This time was terrible. I thought they permanently broke my spine.”

After the Ladies in White were detained Sunday, government officials brought in musicians and a dance troupe, which started performing as people filtered back into the park. When a group of men who had witnessed the detentions were asked where the demonstrators had been taken, they simply shrugged.

“We didn’t see anything,” said one man.