President Obama’s speech in apartheid Cuba failed to measure up even to Jimmy Carter’s speech on the island. This may very well end all doubt as to which of these two presidents will earn the dubious title of the very worst American president in modern history. 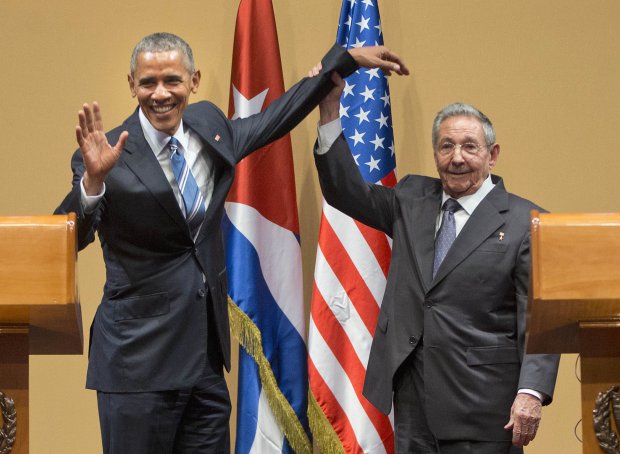 President Obama had a good moment today. But not enough to justify his trip.

In a nationally televised speech in Cuba, he told Raul Castro “not [to] fear the different voices of the Cuban people — and their capacity to speak, and assemble, and vote for their leaders.”

Yet, unfortunately, Obama then spoke about rights and freedoms in general terms — as what he believes — rather than as universal rights.

“So let me tell you what I believe. I can’t force you to agree, but you should know what I think,” Obama hesitantly said as he began to read off a list of rights.

The same thing happened yesterday during the official press conference.

But then after the press conference, Obama’s Deputy National Security Adviser, Ben Rhodes, seemingly tried to give Castro cover, “it’s their belief that they are not political prisoners, that they are in prison for various crimes and offenses against Cuban law.”

Not to mention former U.S. Secretary of Commerce, Carlos Gutierrez, who clumsily sought to downplay human rights in Cuba (in favor of business interests) by parroting Castro’s contortions.

“Somebody mentioned today, there’s a lot of factors — 50, 60 different factors of what human rights are,” said Gutierrez.

Yes, that “somebody” was General Raul Castro.

Let’s compare Obama’s speech to that of former U.S. President Jimmy Carter, who in 2002 also spoke to the Cuban people in a nationally-televised speech from the University of Havana.

Granted, Obama’s persona and the historical timing of his speech are different than Carter’s, but that should have given Obama even more leverage — not less.

Moreover, Carter’s speech was also filled with apologies and mea culpas. But at least it reflected clarity in key universal values and highlighted the courageous efforts of Cuba’s democracy movement.