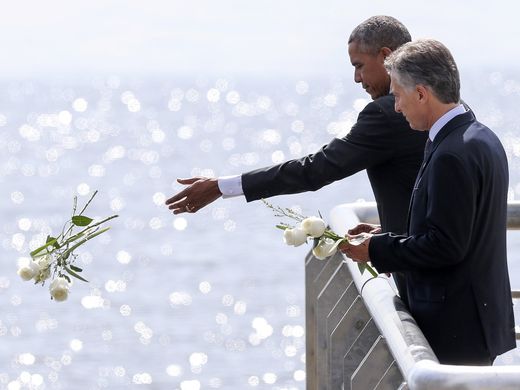 Just three days ago in Havana, President Obama wined, dined and did “the wave” at a baseball game with the perpetrator of endless crimes against the Cuban people; asked us to bury the hatchet and forget the past; and to cut business deals with the Castro family and its military-owned monopolies.

Then, yesterday in Buenos Aires, President Obama condemned Argentina’s former military junta; encouraged us never to forget the past and hold its perpetrators accountable; and lamented U.S. policies that supported that country’s dictatorship.

It begs the questions:

Would Obama have posed for a picture in front of the headquarters of the Argentine military dictatorship’s SIDE or Triple A, as he did in front of Cuba’s G-2 headquarters emblazoned with an image of Che?

We’d previously posted how Obama’s Cuba speech paled in comparison to former President Jimmy Carter’s, which was delivered at the University of Havana in 2002.

But instead compare Obama’s Cuba speech to his own remarks two days later.

In Argentina, Obama demonstrated sympathy for the dictatorship’s victims, singled out those who fought for freedom, and highlighted the key role that justice and accountability play in the process of healing and reconciliation.

In other words, he’s practicing in Cuba the opposite of what he preached in Argentina.

It’s the speech Cubans that deserved (even if delivered from the Memorial Cubano in Miami), but for whatever reason (e.g. ideological hypocrisy) were denied.