Between a Historic Milestone and the Horror of History 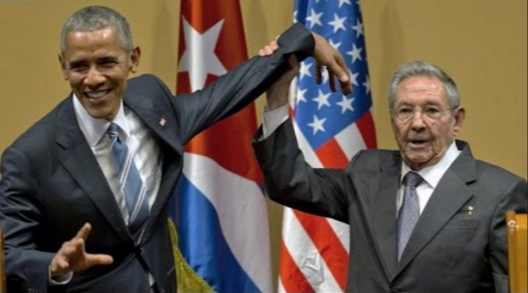 A “historic milestone”: This is what Americans call President Obama’s visit to the Cuba of Fidel and Raul Castro. That is, the Cuba that has not had a legitimate president for 64 years. And a Cuba that is of the caste of children, nieces, nephews and grandchildren, all named Castro. All of them visible in the neo-Castro selfies, holding key positions in the military-corporate apparatus of the State, looking ahead to the dynastic succession announced for 2018.

The American subculture of spectacles obliges them to invent “historic milestones” of all kinds. Bored to the point of catharsis with the surrealistic encounter with a democratically elected African-American and an octogenarian general with bloodstained hands.

The White House has specialized in supporting the bloodiest Latin American caudillos: Batista, Trujillo, Ríos Montt, Somoza, Stroessner, Pinochet and a chilling et cetera that culminates with the Clan Castro. The “novelistic” dictator in our hemisphere is in debt to the powerful in Washington, who applaud and abandon the satraps in their own backyard according to the profits in play.

But let’s not be unfair to the Obamacracy: The Cuban Castrocracy has also been blessed by a record three Catholic popes and one Orthodox one, by the populist saints of our region, by American academia with its Revolutionary Oedipus Complex, and by European governments pressured by left-wing intellectuals and right-wing business interests.

Kind-hearted Obama arrives at the last surviving Revolution Theme Park in the Global Marketozoica Era. To exempt him from a mea culpa, he arrives spurred on by the misery of the Cuban exile millionaires, desperate to divide up among themselves the ruins of the island, while some even dream of their own candidacy for parliament or president, ready to return to the homeland the first second Raulpolitik that is declared to be in pseudo-democratic retreat.

Thus, the proletarian Utopia turns into State Capitalism. With the added value of a Communist Party that, according to the Constitution, is the only legal party in Cuba, the character of whose social system is enshrined in the Constitution as “irreversible” in perpetuity. Neither at the ballot box or at the barrel of a gun.

For this Castroism had to assassinate Oswaldo Payá on 22 July 2012, the Cuban opposition figure with the greatest moral authority and popular base, and the first to win the European Parliament’s Sakharov Prize for Freedom of Thought for his citizens’ initiative known as the Varela Projects, an authentic alternative for the transition to democracy, unlike the Raulist reforms which confer privileges and concessions from a power that consults no one but itself, and that does not restore and of the rights hijacked from the Cuban people.