On April 1, 2016 The Miami Herald published my letter to the editor which discussed why a Cuba consulate in South Florida would be a bad idea. The response by a critic was that:

We have consulates from countries we don’t necessarily like but they’re here.”

This did not respond to the issue raised which was the concern that Cuban diplomats are often in reality intelligence officers, as was the case with the individual that the Miami Beach mayor and commissioner met with during President Obama’s visit to Cuba. Furthermore that intelligence operations in the past in South Florida had crossed the line into sabotage, and murder conspiracy. Finally that these practices by Cuban intelligence agents stretches back over decades. 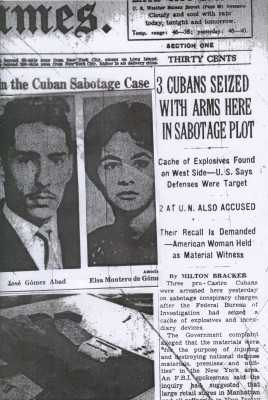 Cuban “diplomats” Elsa Montera Maldonado and Jose Gomez Abad, a husband and wife team at the Cuba Mission in New York City, who in reality were State Security agents who plotted to murder large numbers of Americans. Both were expelled for their role in a planned terrorist attack on the Friday after Thanksgiving in 1962 which sought to detonate 500 kilos of explosives inside Macy’s, Gimbel’s, Bloomingdale’s and Manhattan’s Grand Central Terminal.

This un-diplomatic behavior is not limited to the United States. At the Cuban embassy in Paris, France on April 24, 2003 so-called Cuban diplomats engaged in the brutal beating of nonviolent protesters with iron bars and threatened them with deadly force.

“Not only did members of the embassy come out with iron bars to hit us, but one of them was carrying a firearm, which he loaded while outside the embassy,” RSF Secretary-General Robert Ménard said. “This new element is extremely serious. It is unacceptable that persons linked to a foreign embassy should commit such offences on French territory.”

The behavior of Cuban diplomats in other countries should also serve as reason for caution in opening consulates across the United States, and especially in South Florida with a population of Cuban-Americans that would be specially targeted by the dictatorship.

1 thought on “Cuba consulate in Miami: Opening the door to Castro spies”