From the Cuban Democratic Directorate:

* Mother demands for her son’s safety and freedom.

Link to video HERE– Protest in Havana and Yaser’s arrest

The Cuban Democratic Directorate joins Yaqueline Boni Echevarria in denouncing the brutal re-arrest of her son, peaceful Cuban activist Yaser Rivero Boni on Tuesday, April 26th in Havana, Cuba. Yaser, who had previously been left half-blinded by blows received while serving time as a political prisoner, has yet again received a beating and thrown in prison all a result of asking for “Libertad” (freedom) for political prisoners and for Cuba.

Yaser literally stepped into the spotlight by taking his plea for freedom to a live ESPN baseball audience during President Obama’s visit to Cuba.  As ESPN’s Bob Levy began a live shot from outside the stadium, Yaser approached announcing that he was a member of the opposition and asking for freedom of political prisoners, those same political prisoners which Dictator Raul Castro has very publicly denied having and challenged to release on —-if a list of names was made available to him (list was made available that same day). 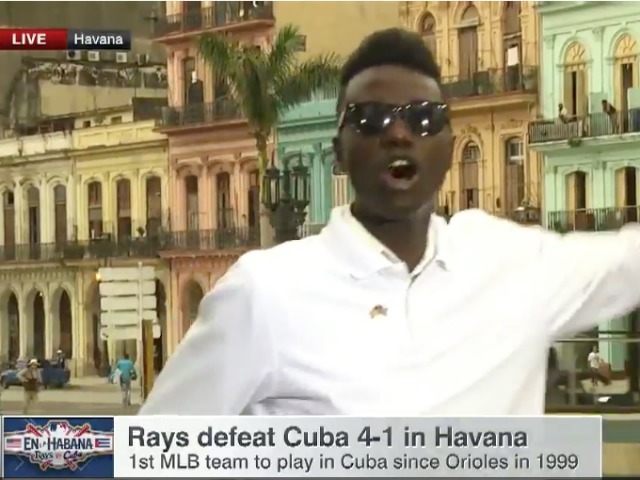 Levy went on to show scenes captured by ESPN in which Yaser alongside other peaceful demonstrators were forcibly dragged down the street, one by his neck, tossed into cars and whisked away. Levy went on to read on air the paper left behind by Yaser  and also posted it on his twitter account. Levy’s actions were very appreciated by Cuba’s growing opposition movement which like Yaser risk beatings, imprisonment and death all in the name of freedom.

Yaser’s mother Yaqueline is also a familiar face of the Cuban opposition. From images depicting her bruised up, immensely swollen face, a result of vicious punches from State Security for her participation in Ladies in White marches to images of her being dragged down the street during International Human Rights Day.

Yaqueline who was herself threatened by the Regime to leave Cuba or risk retaliation being taken out on her son, left for the sake of his safety and with that is now willing to return to ensure his safety and freedom. “Now I ask Raul Castro, are you willing to let me return to Cuba after having forced me to leave the same?” is a question she poses to Castro via Cuban Embassy officials.

The Cuban Democratic Directorate asks human rights organizations, the Cuban exile and the international community to join Yaqueline Boni’s call for her son’s safety and freedom.