After word of the State Department’s warning to American citizens of Cuban-born parents of the perils of traveling to Castro’s Cuba began to receive lots of attention, lobbyists and supporters of the apartheid regime here in the U.S. quickly sprang into action to defend the Castro dictatorship. Soon thereafter, without explanation or reason, the State Department quietly softened its warning.

John Suarez has a report on the questions this sudden and unexplained decision by the State Department raises.

Questions for the US embassy in Havana, Cuba on U.S. Citizens Services section addressing Cuban Americans 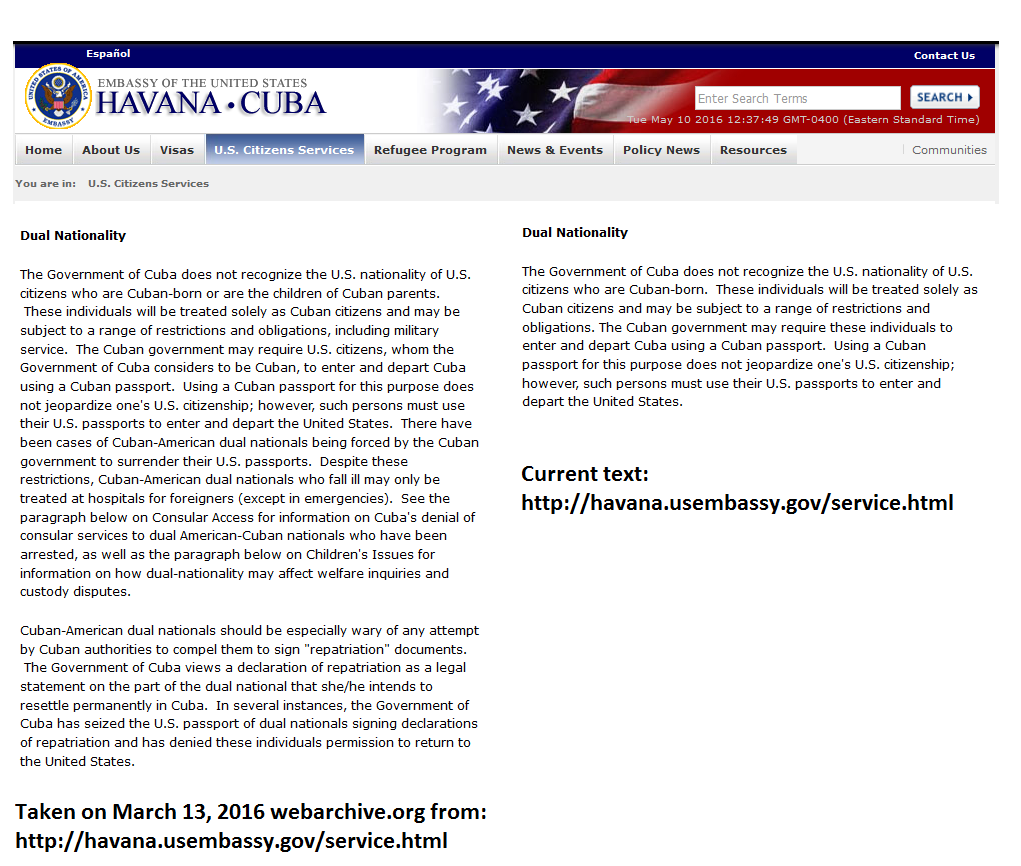 Cuba is a lawless autocracy with exhibit A being its response to the Varela Project, a citizen initiative that should be legal within existing Cuban law, but instead led to a massive crackdown and long prison sentences in 2003. This is further concrete proof that the regime in Cuba is a tyranny.

Within this context the statement from the United States embassy in Havana regarding the rights of Cuban-Americans and natural born Americans of Cuban descent is of great concern. The Obama administration has engaged in a policy of unilateral concessions in an effort to normalize relations with the Castro dictatorship. This has emboldened the regime in Cuba. Repression and violence are spiking in numbers not seen in decades.

The US embassy issued some serious warnings to Cuban borns and their children last year and after bad press over the past week quickly changed the language. Initially it gave a number of ominous warnings:

Dual Nationality
The Government of Cuba does not recognize the U.S. nationality of U.S. citizens who are Cuban-born or are the children of Cuban parents.  These individuals will be treated solely as Cuban citizens and may be subject to a range of restrictions and obligations, including military service.  The Cuban government may require U.S. citizens, whom the Government of Cuba considers to be Cuban, to enter and depart Cuba using a Cuban passport.  Using a Cuban passport for this purpose does not jeopardize one’s U.S. citizenship; however, such persons must use their U.S. passports to enter and depart the United States.  There have been cases of Cuban-American dual nationals being forced by the Cuban government to surrender their U.S. passports.  Despite these restrictions, Cuban-American dual nationals who fall ill may only be treated at hospitals for foreigners (except in emergencies).  See the paragraph below on Consular Access for information on Cuba’s denial of consular services to dual American-Cuban nationals who have been arrested, as well as the paragraph below on Children’s Issues for information on how dual-nationality may affect welfare inquiries and custody disputes.

Cuban-American dual nationals should be especially wary of any attempt by Cuban authorities to compel them to sign “repatriation” documents.  The Government of Cuba views a declaration of repatriation as a legal statement on the part of the dual national that she/he intends to resettle permanently in Cuba.  In several instances, the Government of Cuba has seized the U.S. passport of dual nationals signing declarations of repatriation and has denied these individuals permission to return to the United States.

The crowd that is backing engagement and has the ear of the White House came out to discount the above statement as false.  Now the U.S. embassy page reads as follows:

Dual Nationality
The Government of Cuba does not recognize the U.S. nationality of U.S. citizens who are Cuban-born.  These individuals will be treated solely as Cuban citizens and may be subject to a range of restrictions and obligations. The Cuban government may require these individuals to enter and depart Cuba using a Cuban passport.  Using a Cuban passport for this purpose does not jeopardize one’s U.S. citizenship; however, such persons must use their U.S. passports to enter and depart the United States.

Now there is an attempt to back track and say that the matter has been cleared up.  Pedro A. Freyre, the Chairman of International Practice at Akerman LLP, says in a CBS4 interview with Hank Tester that one can rest easy that what the U.S. embassy posted was false. He also tried to downplay it stating: “What I look at is what has been happening, what is happening on the ground. Never mind there is an obscure statement in a sub file of a U.S. Embassy in obscure location.”

Attorney Freyre should speak with whoever was informing him on the location of the statement on the U.S. embassy page because he misspoke. The statement was displayed on the main page of U.S. Citizens Services (http://havana.usembassy.gov/service.html ). This was not an obscure and hidden statement as Mr. Freyre implies. Quite the opposite and for that reason this controversy raised alarm, is far from cleared up, and raises a number of important questions.