Because no foreign policy built on a foundation of appeasement and surrender to murderous terrorist dictatorships would be complete without doing everything you can to help fund their terrorism and oppression. 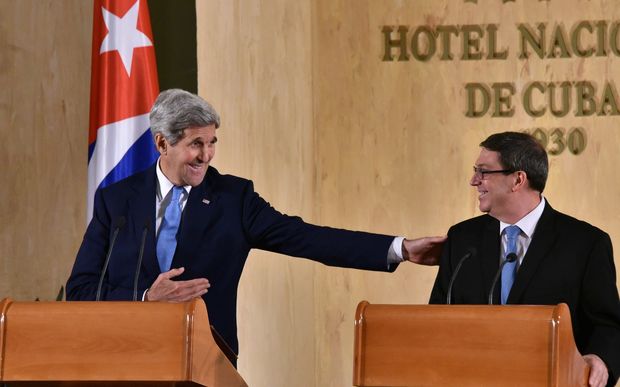 This week, U.S. Secretary of State John Kerry traveled to Europe to reassure bankers who seek to do business with Iran.

We kid you not.

Kerry traveled to London, where he met with senior executives from leading European banks, including Deutsche Bank, HSBC and Credit Suisse, to assuage their concerns about doing business with Iran.

“We want to make it clear that legitimate business [with Iran], which is clear under the definition of the agreement, is available to banks,” Kerry told them.

Yesterday, in announcing an umpteenth round of U.S.-Cuba (empty) talks, senior Cuban Foreign Ministry official Gustavo Machin (who was expelled from the U.S. in 2002 for espionage activities) emphasized the Castro regime’s latest demand.

He demanded the Obama Administration give assurances for banks to deal with Cuba.

“It has still not been possible to normalize banking relations between the two countries, and among American banks and multinational banks there is a still much fear of dealing with Cuba. [Obama’s authorization of dollar transactions] needs to be accompanied by a strong statement, a political statement, or even a legal tool, which ensures banks that they are not going to be punished for dealing with Cuba,” said Machin.

After all, this is the biggest pushover U.S. Administration ever.