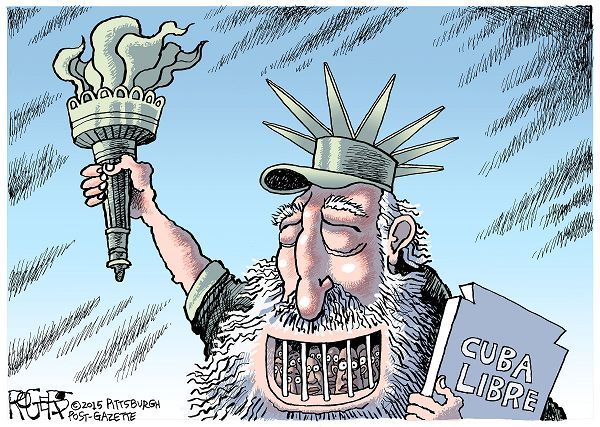 There is a fundamental error by analysts that look at the Castro regime solely through the prism of U.S. – Cuba relations defined by economic sanctions without looking at the larger regional and international context.  This is especially the case with regards to human rights and the so-called “principle” of consistency in the light of perceived double standards. It seems that all who argue against double standards inevitably advocate lowering standards to the lowest common denominator never raising them.

Double standards as a code phrase for lowering standards
United States foreign policy in Saudi Arabia and China have, in the name of realpolitik, not been principled on the human rights front and led to outcomes disastrous for the United States. At the same time one must recognize that narrow and powerful interests have benefited financially from these arrangements. The argument advanced by those seeking to repeat the regrettable approach used in Saudi Arabia and China with Cuban foreign policy is one of consistency that results in ending a principled human rights policy in Cuba bringing it into line with other disastrous policies that have not served the just interests of the United States. To suggest that foreign policies in Saudi Arabia and China advance human rights at the expense of narrow economic interests is to be ignored or ridiculed. Meanwhile the President visits Vietnam and opens up weapon sales to the communist dictatorship while claiming to promote human rights there.

The Castro Regime’s War on Human Rights
In the larger international context historically providing the Castro regime a free pass in its outlaw behavior has negatively effected not only countries in the Americas and Africa, but also led to more international terrorism and the decline of international human rights standards.

Cuban governments prior to the Castro regime played an important role in advancing human rights regionally and internationally punching above their weight. Sadly the Castro regime has been successful in undermining this positive legacy.

This is not an accident but to be expected for a totalitarian dictatorship that has sought to duplicate its political model around the world and has been successful in Nicaragua, Venezuela, Bolivia and Ecuador.