“My job was to bug visiting American’s hotel rooms with both cameras and listening devices. When the American politicians and celebrities arrived at the Hotel Nacional, Melia Habana and Melia Cohiba we already had their rooms completely bugged with sophisticated taping equipment. Fidel Castro himself is a special connoisseur of these tapings and videos.“ (Cuban intelligence defector Delfin Fernadez.) 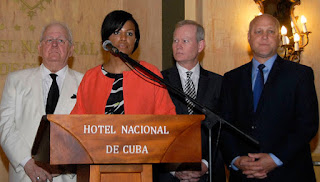 Remember how after Baltimore was half destroyed by rioters last summer Baltimore mayor Stephanie Rawlings-Blake’s made headlines by claiming she gave Baltimore rioters “Space to Destroy?” She tried to walk back the unfortunate statement—but it only half-worked.

As president of the U.S. Conference of Mayors, last month Stephanie Rawlings-Blake was in (totally destroyed by Communism) Cuba leading a mayoral delegation which also includes Mitch Landrieu, mayor of New Orleans (among the murder capitols of the U.S.)

“These meetings and visits will provide U.S. mayors and Cuban officials the opportunity to SHARE BEST PRACTICES for providing city services in education, healthcare, infrastructure, and transportation, “(according to the press release.)

Note how the report says the Communist apparatchiks and U.S. mayors will “share.” This implies that– on the dime of their taxpayers, and in between imbibing mojitos and getting secretly videotaped by KGB-trained secret police –mayors of important U.S. urban centers will:Seek advice on economic development from Communist crooks and murderers who converted a nation with a higher standard of living than much of Europe and swamped with immigrants from Europe into a vast slum and sewer that repels evens Haitians (and who for the past decade have essentially run Venezuela.)

Seek advice on governmental services from Communist vermin who converted a nation that formerly attracted more immigrants per-capita than the U.S. (and even from the U.S.)  into a hellhole that drove TWENTY times as many desperate Cubans to die horribly attempting to escape it as East Germans died trying to flee East Germany.

(O/A, by the way, stands for Organizacion Autentica–the activist wing of Cuba’s largest political party in the 1940’s and 50’s. “Their sign from Jan. 1959 reads: “Fidel, O/A salutes you!” Within a year of that salute many O/A members were  crumpling in front of Fidel’s firing squads.)

Seek advice on healthcare from murderers and imbeciles who converted a nation with the 13th lowest infant-mortality on earth –-ahead of France, Belgium, West Germany, Israel, Japan, Austria, Italy, Spain, and Portugal– into an island slum, sewer and prison ravaged by diseases long-eradicated in Cuba, boasting the highest suicide rate in the hemisphere–and whose practicing “doctors” overwhelmingly flunk the exam given in the U.S. for licensing as doctor’s assistants.”

Seek advice on improving urban transportation from Communist assassins and idiots who converted a nation whose citizens in 1958 owned OVER THREE TIMES as many cars per capita as did Spaniards, Japanese and Greeks into a place where ox-carts and rickshaws have become coveted luxury items (to say nothing of the mass coveting of toilet paper.)

In fact, in 1958 Cubans owned about the same number of cars per-capita as those famous car-nuts the Italians (Fiat, Alfa-Romeo, Masseratti, Ferrari, etc.,) Quite fittingly, in the 1950’s Cuba also hosted the “Cuban Grand Prix,” featuring the world’s top drivers from America’s Caroll Shelby to Britain’s Stirling Moss to Argentina’s Juan Manuel Fangio.

Our friends at Townhall help disseminate some items not well understood outside the tiny Cuban-American informational ghetto.