No this is not a late April Fool’s joke.

I wish it were.

Some cable industry knotheads here in the U.S. are all set to bombard Lateeeeen-oh tv screens with Castronoid programming, fed directly into American homes from Havana.

It’s hard to get outraged about every new act in the Normalization Circus, but this one should make blood boil in the veins of anyone familiar with the propaganda-driven content of all Castronoid “entertainment” –even  their most seemingly benign or banal shows — all of which are infused with politics.

Never mind the fact that practically everything produced in Castrogonia is crap to begin with, even worse than Mexican telenovelas or Sabado Gigante.

If this Normalization Circus weren’t a total farce, we’d be reading about American programming being made available to Cubans — other than TV and Radio Marti, which are not easy to access.

But, nooooooooooooooooo!  Sorry, Mildred, the entertainment in this circus flows only in one direction and the only party to benefit from it is the Castro dynasty.

Go to hell, DISH and DishLATEEEN-OH.  There’s a special place down there for folks like you. 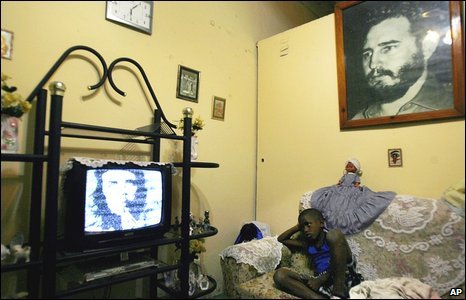 Cuban TV programming to be broadcast in U.S.

Cuban programming is coming to U.S. airwaves thanks to DISH, the Colorado-based provider with 13.9 million TV subscribers. The company announced the launch of a new channel Thursday called CUBAMAX TV, which will carry entertainment programming created in Cuba featuring some of the island’s most famous celebrities. The channel will not feature any political or news programming, but instead will focus on comedies, children’s programming, music videos and telenovelas.

The channel’s operations will be in Miami, where producers will package shows from Cuba and distribute them to subscribers of DishLATINO.

“Connecting viewers with their heritage and culture is at the heart of the DishLATINO brand promise, and today marks an important milestone as we deliver movies and TV shows from Cuba that were previously unavailable,” Alfredo Rodriguez, vice president of DishLATINO, said in a statement. “With an estimated two million Cubans living in the U.S. and many others eager to learn about the island’s rich culture, we’re excited to provide a window into the arts and entertainment world of Cuba.” 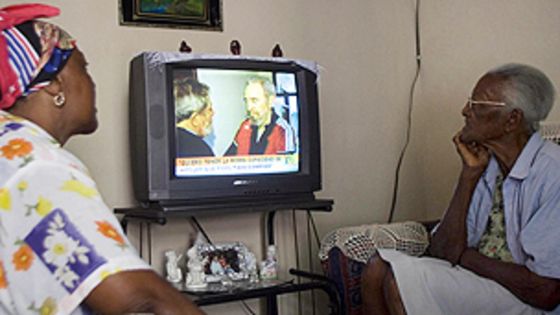 1 thought on “Another totally one-sided deal with the Castro regime: Castronoid TV programs coming to the U.S.”