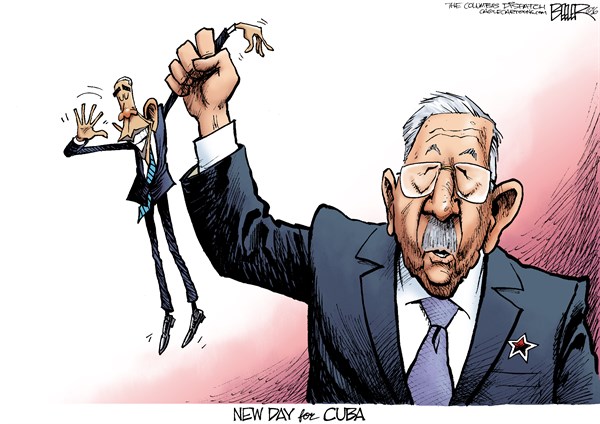 We’ve been hearing a great deal about how opening Cuba will bring in Americans with their dollars and democratic ways. Well, not all Americans are welcomed by the Castro regime, as The Hill reports:

“At a time when the Obama Administration is rolling out the red carpet for Havana, the Cuban government refuses to be open and transparent with the peoples’ Representatives,” McCaul said in a statement on Friday.

“Sadly, it appears to be easier for Cubans to come to the United States than for Members of the House Homeland Security Committee to get to Cuba.”

“The Administration is eager to have as many people as possible visit Cuba — except for those who are attempting to examine Cuban security infrastructure,” said Katko, chairman of the transportation security subcommittee.

“We still don’t know if Cuba has the adequate body scanners and explosive detection systems in place, whether it has the technology to screen for fraudulent passports or ID, whether or how aviation workers are screened, and if Federal Air Marshals will be allowed to fly missions to Cuba on commercial flights.”

There are a couple of problems here.

First, how can U.S. commercial jets fly to and from Cuba without a full security checkup? Don’t we do this in every country? Do we want to expose U.S. citizens to terrorism or worse?

Second, this is a huge embarassment for the Obama administration, i.e. “in your face Obama”. The Cuban government is rejecting an official delegation from the U.S.

It simply confirms that the more you embrace dictators the less they respect you.

President Obama should order a stop to all flights to and from Cuba until there is a security clearance. It’s time for President Obama to stand up to something other than just conceding on every issue with the Cuban dictatorship.

Of course, we are talking about the same president who lets Russian MiGs fly 50 feet over our ships without consequence.