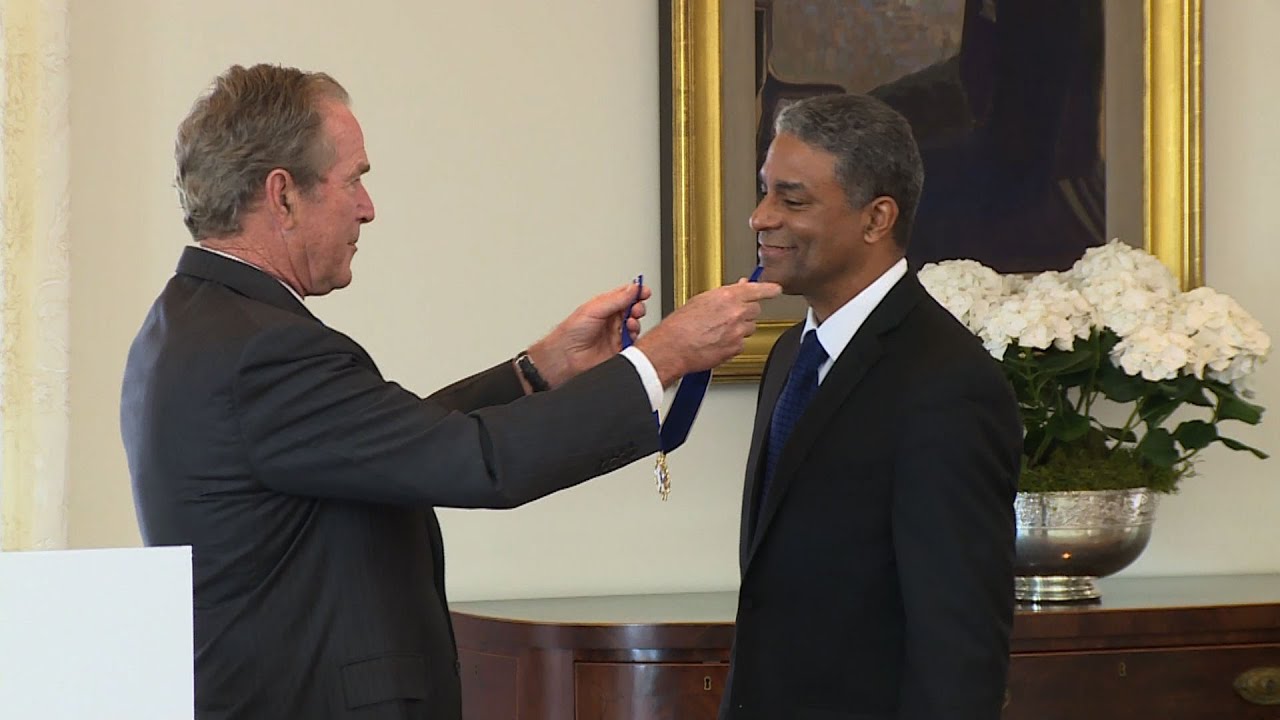 Back in 2007, then President Bush presented The Medal of Freedom in absentia to the Cuban human rights and democracy activist Oscar Elias Biscet. This week, he was able to place the award on Biscet’s shoulders.

For the record, Dr Biscet is a human rights leader:

Dr. Oscar Elías Biscet is a physician, winner of numerous human rights awards, including the 2008 Presidential Medal of Freedom, and president of the Lawton Foundation for Human Rights, which peacefully promotes human rights and the rule of law in Cuba. In reprisal for his human rights activities, Dr. Biscet was sentenced to 25 years in prison and has been held in some of the harshest conditions experienced by any prisoners in Cuba, including in punishment cells and solitary confinement. This is Dr. Biscet’s second stint in prison. Biscet first ran afoul of the Castro regime in the 1990s, when he investigated Cuban abortion techniques — Cuba has by far the highest abortion rates in the Western Hemisphere — and revealed that numerous infants had been killed after being delivered alive. The report was sent to Fidel Castro with un-official statistics and testimonies from mothers who described the infanticide. Biscet was arrested and served three years in a prison camp after publishing this article condemning abortion. Officially, Biscet was imprisoned for the crime of “disrespect.” After he was released in 2002, Biscet was again arrested, after only a month of freedom, during Cuba’s Black Spring.

Biscet’s prison cell is the stuff of a Victor Hugo nightmare: tiny, filthy, and shared with an almost uncontrollably violent cellmate. He has no windows and hasn’t seen sunlight in weeks. He’s afforded no medicines or toiletries. Other than a 2-hour visit from his wife every two months, he’s permitted no visitors, correspondence, or other reading materials. Currently, Dr. Biscet suffers from chronic gastritis, hypertension and recurring infections and is reportedly losing his eyesight; his poor health has been severely aggravated by unhygienic prison conditions and harsh treatment. At one point, Dr. Biscet was reported to have lost more than 60 pounds while in prison. Nonetheless, he inspires others with his repeated acts of defiance against his persecutors.

Recently, in a letter smuggled from his prison, entitled Civil Disobedience, Biscet urged all Cubans to continue to pray and fast until the government signs the international human rights treaties that have been established by the United Nations. Biscet wrote, “The people of Cuba have been suffering the scorn of a totalitarian tyranny, Communism, throughout four decades. Due to this inhumane treatment whereby the decorum of a people is violated, many Cubans are indignant and have risen up to pray and fast, beseeching the God of the Bible…we must expedite the achievement of these basic rights through civil disobedience and by putting into practice all methods to obtain our humanitarian aim.” Biscet pledged, “Here, in this dark jail where they force me to live, I will be resisting until the freedom of my people is obtained.”

Only this year, five years after his release from prison, was he allowed to travel to the United States.

Dr. Biscet is precisely the kind of human rights leader that President Obama, or any other U.S. president, should be embracing.

Perhaps President Obama does not want to upset Raul Castro.

Or maybe Dr. Biscet is politically incorrect: A Cuban black who opposes abortion and the opening to Cuba without demanding something from Castro.

Where is President Obama? He is talking to a lot of people but not a black Cuban human rights leader.