Finally, Che gets the company he so truly deserves.

Or, should one say: finally Hitler gets some of the respect Che has been hogging for far too long.

Either way, one must admit that this was overdue, given all the undue attention focused on lowly Che, who would have loved to kill millions of human beings, but never got the chance to do so.

Call them twins separated at birth, or something like that: Adolph and Ernesto.

Che was Adolf’s tropical doppelganger.  And capitalists have been cashing in on his ultra-communist image for decades.

Now, finally, capitalists are cashing in on someone who should share the limelight with Che, or perhaps eclipse him.

Aunt Jemima and Uncle Ben are often criticized as racist brand ambassadors, but there’s a corporate mascot popping up all over the world who makes their alleged sins looks small: Adolf Hitler.

Like characters in the Mel Brooks film “The Producers,” business owners from Belgium to Taiwan to the Gaza Strip have taken to using the Nazi dictator’s name and visage to sell shampoo, fried chicken, jeans, space heaters and more. In Gaza, the sellers of Hitler jeans even put knives in their mannequins’ hands last fall to celebrate the wave of Palestinians who were stabbing Israeli Jews; the knives were quickly removed. 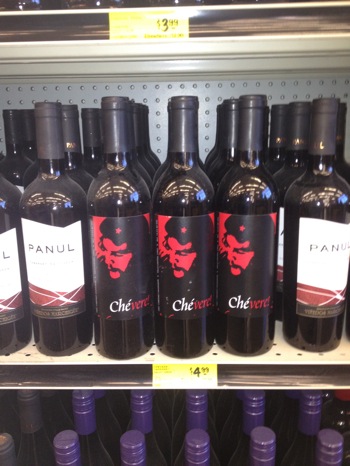 The Anti-Defamation League has been tracking — and protesting — the promotional use of Hitler by commercial businesses for more than a decade. Here are some examples of what they found.

• A fried chicken restaurant called Hitler opened in Thailand in 2013, with a storefront that resembled a KFC store, but instead of Colonel Sanders, it featured Hitler on the awning wearing a red apron and bow tie. • A Turkish shampoo commercial shown in 2012 used historic footage of Hitler addressing a rally in an effort to persuade men not to use women’s shampoo. Subtitles shown over the footage had Hitler supposedly saying, “If you are not wearing a woman’s dress, you should not use her shampoo, either.”

• A Nazi-theme restaurant called Hitler’s Cross opened in 2006 in Mumbai, India, with a swastika in its logo and a large portrait of Hitler at the entrance. After Jewish groups objected, the restaurant was renamed the Cross Café.

• A Croatian sugar company began selling sugar packets in 2007 that were printed with Hitler’s image and jokes about the Holocaust.