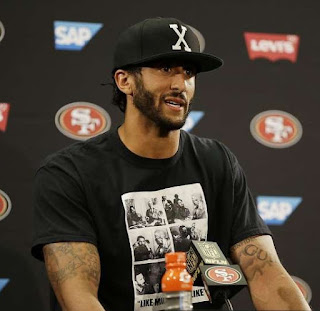 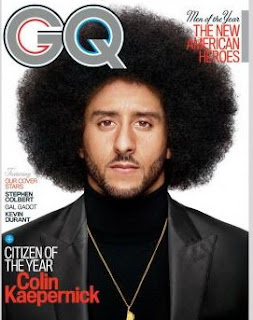 Below please see close-ups of some of the pictures on the T-shirt Colin Kaepernick wore during the press conference where he  denounced his homeland as racist and where he proclaimed: “I have to stand up for people that are oppressed.” 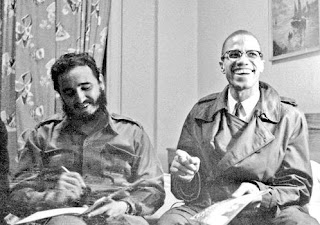 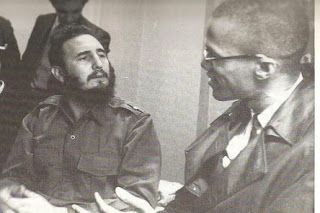 “I’m going to continue to stand with the people that are being oppressed. There is police brutality. People of color have been targeted by police…There’s people being murdered unjustly and not being held accountable.” (Colin Kaepernick)

While proclaiming the sentiments above Colin Kaepernick wore a T-shirt showing Fidel Castro.  If Kaepernick were starring in a Monty Python or SNL skit we’d get it. If he was starring in a Twilight Zone or Alice in Wonderland remake we’d understand.

But the shirt did not seem to denote any sentiments satiric or surreal. Instead, while denouncing oppression, Kaepernick chose to idolize a Stalinist dictator who jailed and tortured political prisoners at a higher rate than Stalin himself during the Great Terror.

While denouncing “police murders” Kaepernick idolized a Stalinist dictator whose KGB-trained police and death squads murdered more Cubans in his first three years in power than Hitler murdered Germans during his first six.

While denouncing “injustices against people of color” Kaepernick idolized the jailer and torturer of the longest suffering black political prisoners in the modern history of the Western hemisphere. Many of these black Cubans suffered longer and more horrible incarceration in Castro’s KGB-designed dungeons than Nelson Mandela spent in South Africa’s (relatively) comfortable prisons, which were open to inspection by the Red Cross. Castro has never allowed a Red Cross delegation anywhere near his real prisons.

Yes–owing much to modern American education–this black American athlete is (unwittingly) hailing the man who jailed and tortured the largest number of black political prisoners in the modern history of the Western hemisphere and who craved–and came within a hair of– nuking the nation that has made Kaepernick a multi-MULTI-millionaire.

Above please note the race of the Castroite firing squad and it’s commander –as compared to the race of their (untried) victim. Usually liberals condemn  such things as “lynchings!”

“Of course I knew the missiles were nuclear- armed,” responded Fidel Castro to Robert McNamara during a meeting in 1992. “That’s precisely why I urged Khrushchev to launch them. And of course Cuba would have been utterly destroyed in the exchange.”

“The Negro is indolent and lazy, and spends his money on frivolities, whereas the European is forward-looking, organized and intelligent.” (Che Guevara)