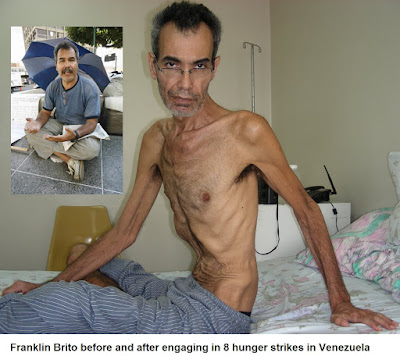 Guillermo Fariñas is but one of many hunger strikers who have taken on the corrupt and abusive Castro regime.

It should come as no surprise to anyone that the Castro colony of Caracastan has also had its hunger strikers, and that some have taken their protest to the bitter end.

Here is one such hunger striker, who could be regarded as a victim of exported Castroism.

Franklin Brito: A Martyr for Liberty and Human Rights in Venezuela

“I’ve learned of the death of hunger striker Franklin Brito. It appears that Hugo Chavez now has his own Orlando Zapata” – Yoani Sanchez,August 31, 2010 on twitter

Hunger strikes are the ultimate recourse in the arsenal of non-violent resistance, and over the years around the world it has succeeded at times but in places like Cuba, Ireland, and six years ago in Venezuela a human being died on hunger strike.

In Cuba the names of Pedro Luis Boitel, Orlando Zapata Tamayo andWilman Villar Mendoza are remembered as is Bobby Sands of Northern Ireland (who the Cuban dictatorship built a memorial to in Cuba) and on August 30, 2010 Venezuela’s Franklin Brito joined this select grouping that demonstrated the ultimate price when engaging in a hunger strike.

Franklin Brito was a farmer and a biologist whose land wasexpropriated by Hugo Chavez in 2000 according to CNN. Other news agencies place the date of expropriation anywhere between 2003 and2004. He exhausted every recourse and was driven to the final option:the hunger strike in 2005.  A chronicle of Brito’s odyssey is available in Spanish on Wikipedia. In the video below taken three months prior to his death the hunger striker describes his condition and his struggle for justice:

“Article 17 of the Universal Declaration of Human Rights states: (1) Everyone has the right to own property alone as well as in association with others. (2) No one shall be arbitrarily deprived of his property.

Article XXIII of the American Declaration states: “Every person has a right to own such private property as meets the essential needs of decent living and helps to maintain the dignity of the individual and of the home.”

When Franklin Brito’s family said that he stood for “the struggle of the Venezuelan people for property rights, access to justice, for living in freedom,” they were simply stating the facts of the matter. In the video below taken on November 19, 2009 Franklin Brito declares that:

Continue reading HERE in Notes from the Cuban Exile Quarter