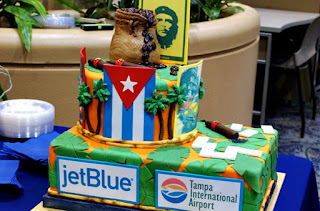 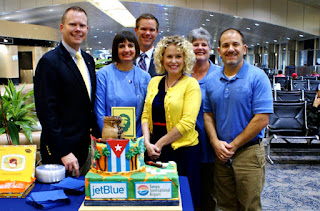 Here’s  the caption to the pics above from one of the airline industry’s top news sources:

JetBlue’s inaugural to Santa Clara, in Cuba, was celebrated with a “Cuban” cake, featuring the country’s famous symbols, namely coffee, cigars and CHE GUEVARA. The flight is operated as a charter service due to the trade embargo between the two countries.

Here’s a recent post from JetBlue’s blog promoting its flights to Cuba:

Here’s a recent post from JetBlue’s blog promoting where to eat in Santa Clara:

Here’ the decor inside the Cafe Museo Revolucion, so heavily promoted by JetBlue:

But despite all of the above, according to JetBlue’s friends at the Miami Herald…Gosh?! JetBlue just CAN’T IMAGINE why ANYONE would link them to Che Guevara imagery?!…In fact any such depictions consist of a “major faux pas!”  Here’s today’s story in the Miami Herald:

Below the headline is an image of a cake, complete with the JetBlue logo, Cuban flag, Cuban coffee beans — and an image of El Che.

JetBlue spokeswoman Elizabeth Ninomiya said the cake was presented to the airline by Tampa International Airport during the celebration of charter flights from Tampa three years ago.

“While the cake is from several years ago and was not designed by JetBlue, we do not believe the cake artist knowingly intended to make any political statements,” Ninomiya said.

The post’s author, Cuban-Amerian writer and political commentator Humberto Fontova, said he found the 2013 cake image while researching a follow up piece to a previous blog post about JetBlue promoting Santa Clara’s connections to El Che.

“When you see a cake with JetbBue on it and Che Guevara on it, it would seem to me if JetBlue had any objection to it they wouldn’t use it,” Fontova said. “JetBlue should thank me because they were advertising, ‘Come visit the burial site of Che Guevara.’ They should be happy I am helping spread their message. They should send me a check.”

In brief: Despite all of the JetBlue-Che Guevara links presented above (including one showing a cake,) since the picture of the cake with smiling JetBlue employees behind an image of Che Guevara on a cake promoting JetBlue flights to Cuba was taken in Dec. 2013 (as the link in the original post clearly indicated)–somehow because of this item– JetBlue is completely absolved of any links with any Che Guevara imagery!

A much better answer to this type of  logic presents itself. Maybe it’s not just JetBlue pilots hitting the sauce while on-duty: 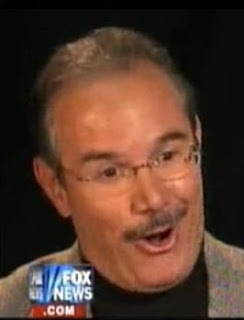 5 thoughts on “Miami Herald in FRANTIC (!!!) damage-control for their friends JetBlue over their Che Guevara cake scandal!”