File this story under “unbelievably frank” or “utterly shameless.”

Or, file it under “despicable moral blindness”…

Sleazoid-in-Chief Joe Biden praised the Obama Doctrine, that is, the current president’s total disregard for human rights in the Castro Kingdom or anywhere else on earth.

According to Slimy Joe getting “no pushback” from monstrous dictators on human rights issues is a great virtue, and asking them to be nicer is “outdated ideology.”

In other words, what matters most in U.S. foreign policy is for the president to be able to “talk to our neighbors” without any friction whatsoever, even when those neighbors are monsters. 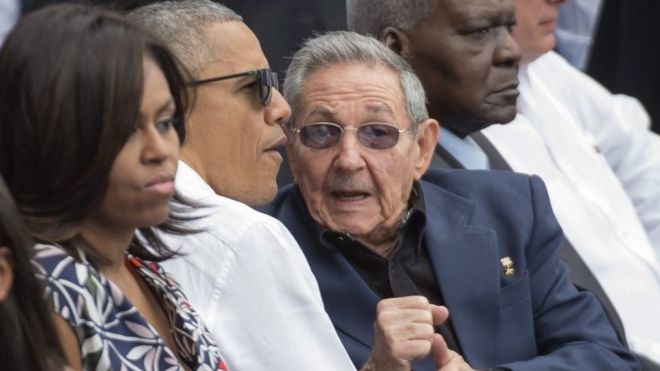 To hell with the people who live under the thumb of monsters.  Making friends with the monsters is priority number one.  That is how one achieves justice and world peace and a legacy.

Capping off his praise for Obama’s great wisdom with a doubly Orwellian rhetorical twist, Slimy Joe pontificated that “everyone should be talking about human rights” anyway.

So, yes, this is how you heal the world: wait for the monsters to realize that they should respect human rights.

Yeah.  Sure.  Why not also allow all criminals to do whatever they want, never reprimand them, and wait for them to realize the error of their ways on their own.

God forbid we get any “pushback” from criminals and thus hurt our chances of “talking” to them or sitting next to them at ball games.

After all, “everyone should be talking about obeying the law” anyway, even the psychopaths who get a thrill out of killing other human beings.

God help us all.

From the Washington Examiner

Vice President Joe Biden touted the Obama administration’s ability to talk to Cuba and other Latin-American countries about human rights “without pushback,” on the same day a Senate critic of the diplomatic thaw said the Castro regime’s brutal treatment of dissidents is growing worse.

Biden’s comments also came amid reports that the government is now blocking text messages containing words such as “democracy” and “human rights.”

Biden told a conference of Central and South American bankers and diplomats Wednesday that President Obama decided early on in his tenure that “we weren’t going to be bound by the mistakes of the past or shaped by an outdated ideology” toward the country.

One of the reasons the administration chose to change the Cuban policy and lift some restrictions on travel and commerce, Biden said, was to get rid of an “ineffective stumbling block to our bilateral relations with other nations in the hemisphere.”

That, in turn, he said, “made it easier to talk to our neighbors without pushback on human rights — everyone in the hemisphere should be talking about human rights — whether it’s in Cuba or Venezuela where they are being denied.”